An student at the University's School of Welsh is behind a new currently touring Wales and taking the world of Welsh theatre by storm. 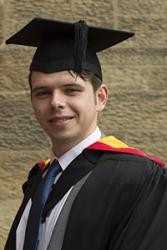 Llŷr Titus is being described as ‘one of Wales’ hottest young playwrights’, and his latest play, ‘Drych’, is produced by Cwmni’r Frân Wen, under the direction of Ffion Haf, who also happens to be a Theatre and Performance Lecturer at Bangor University’s School of Creative Studies & Media, as well as an associate Director with Cwmni’r Frân Wen.

Actors Bryn Fôn and Gwenno Hodgkins star in Drych – the first stage production from 22 year old Llŷr Titus – is an intense and humorous reflection of a desperate journey to understand man’s existence.

According to Ffion Haf, the play’s director, Drych is about “the journey of two people who yearn to understand more about their existence.”

Llŷr, from Sarn near Pwllheli, was part of Frân Wen’s young writer’s project which is run annually by the theatre company.

“Llŷr worked with iconic author Aled Jones-Williams as part of Sgript i Lwyfan (Script to Stage) which recognises and mentors young playwrights. The reaction to his work was such we had to find a way of developing it further so we commissioned a full stage production,” said Ffion.

“It’s essential that we give young voices the stage that their work deserves because they are the future of theatre.”

Llŷr, who is a research student at Bangor University, said: “Being able to work with Aled Jones-Williams was exceptional. It was such a rewarding experience, not only being able to discuss ideas with someone as experienced, but also to have the time and encouragement to write.”

“The inspiration from Drych came from a strange place – the dialogue came first not the idea, the ideas and broader themes only came after playing with the dialogue, everything grew from these conversations.

“It’s a story about two characters talking in a place, and, as so often happens, things crop up that are both pleasant and unpleasant!”

Professor Gerwyn Wiliams is Head of Welsh at Bangor University. He said:

“Llŷr’s had already become a recognised face. He came to us as an undergraduate student having just won the Crown at the Urdd Eisteddfod while a students at Coleg Meirion-Dwyfor  and then won the Drama Medal at the National Eisteddfod. He has recently completed an MA course with us and is embarking on a PhD project funded by the Arts & Humanities Research Council.  It’s been exciting experience following his creative development over the years, both in creative writing modules and scripting as well as in national competitions.  A particular thrill was being part of the audience in Galeri, Caernarfon – with the auditorium full to the brim – watching the powerful production of Drych.  We eagerly look forward to seeing his talents as a writer and academic going from strength to strength!”