New game to help people cut back on drinking 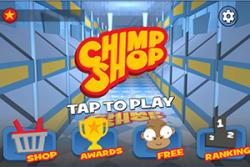 New Year is a time when our thoughts often turn to making changes to our lifestyle. After the excesses of the festive season, reducing the amount of alcohol we drink is often high on this list, but our willpower can always benefit from a little boost to help us make these changes. Research shows that a new mobile game from Bangor University spin-out company Attention Retraining Technologies (ART) can do just that.

Based on original research by Professor Miles Cox from the highly regarded School of Psychology at Bangor University Chimp Shop is a fun new game that is helping people cut back on their drinking.

Early scientific research by Professor Miles Cox at the University’s School of Psychology demonstrated that people who regularly consume alcohol at levels above the recommended limits, pay far more attention to images related to alcohol. For example, when walking down the High Street your attention will be captured more often by alcohol related shop signs or advertising. This “attentional bias” leads to earlier consumption and therefore fuels the cycle of drinking.

Professor Cox and his then PhD student Javad Fadardi developed a lab-based training procedure that has proven to be effective in breaking this cycle by retraining attention away from alcohol related images. Cox’s colleague Professor James Intriligator realised that converting this lab-based procedure into a mobile-based game could lead to dramatic health improvements across the UK. His plan was to develop something that could be rolled out as an early intervention for those people who do not require detoxification treatment but would benefit from reducing their alcohol consumption.

Professor Intriligator, and his team won two SBRi (Small Business Research Initiative) contracts with the Department of Health to test the feasibility of the game on mobile devices and to develop a market ready version. The results demonstrated that the mobile game is as effective as the laboratory-based treatment programme in reducing consumption as well as other negative effects of excessive drinking such as absenteeism, hangovers and lack of productivity at work. Interestingly, players also reported enjoying an alcoholic drink more when they did have one.

“The results of the trial were very encouraging,” said Prof. Intriligator. “As a result, we developed the game further, added some other features to help people cut back and we have now made the game available to the general public on both iOS and Android app stores. The next step is to have the game available to Doctors and Health Authorities to issue free codes, so that patients who wish to reduce their drinking can access the game via the NHS”.

As well as the goal of making Chimp Shop available to as many people as possible ART is now looking at the potential benefits of attention retraining for other areas of concern for public health such as smoking and weight-loss.

Professor Intriligator explains, “Chimp Shop isn’t a silver bullet but it is a proven way to give your willpower a boost – in fact this could be the most fun you ever had cutting back on drinking!”

For more information or for links to download Chimp Shop, visit http://www.chimp-shop.com.