Pwyll ap Siôn, Professor of Music at Bangor University’s School of Music and Media, has received this year’s John Edwards Memorial Award. In honour of the founder of the Welsh Music Guild, the annual award is regarded by many as the most prestigious non-competitive award given in Wales for services to the nation’s music. Recipients in the past have included composers Alun Hoddinott, John Metcalf and Grace Williams, and performers Osian Ellis and Bryn Terfel. Pwyll received the award from Capt Sir Norman Lloyd Edwards at a ceremony held at the Cardiff and County Club on Sunday, 2nd June. 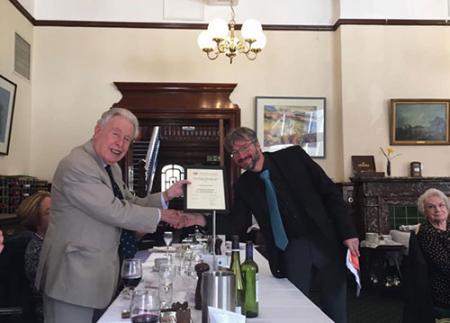