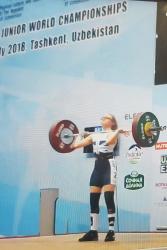 Having competed as a member of Team Wales at the recent Commonwealth Games, Catrin has also recently been awarded Bangor University’s highest sporting accolade, the Llew Rees Memorial Prize.

“To be placed 4th in the world is a fantastic achievement on such a short trip and after the Commonwealth Games.”

The first year psychology student is making her mark in the sporting world- and was also named the ‘Carwyn James Young Welsh Sportswoman of the Year’ at the BBC’s 2017 Wales Sport Awards.