St Gerard’s School are Top of the Bench! 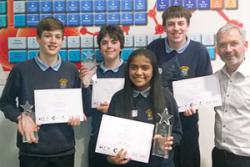 The National Competition for 14-16 year olds is run by the Royal Society of Chemistry, and heats are held all over the country.

St Gerard’s beat nine other teams to win the opportunity to visit Loughborough University’s Chemistry Department for the Final, which will be held on the 29th April 2017.

“We were very impressed with the level of chemistry knowledge shown by all the schools who attended. This year’s regional heat was again another close-fought battle. We wish St Gerard’s every success in Loughborough in April.  The winning score was an impressive 53/70.”

Techniquest Wrexham were new partners for this year and enabled schools from further afield than ever before to take part.  This was done by using Skype sessions for the introduction and finale – whilst the quiz was run in parallel at both sites.

Bangor hosted 8 teams and Techniquest had two teams in Wrexham.

Schools who took part were:

For more information on all chemistry schools events at Bangor University please see the schools section of the Chemistry web site.