This article by John Turner, Professor & Dean of Postgraduate Research, School of Ocean Sciences was originally published on The Conversation. Read the original article.

The third episode of the BBC’s Blue Planet II spectacularly described a series of fascinating interactions between species on some of the most pristine reefs in the world. These reefs, analogous to bustling cities, are powered by sunlight, and provide space and services for a wealth of marine life. 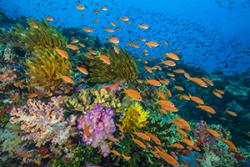 A bustling coral reef in Fiji. : (C) Alex Mustard -© BBCCompetition is rife, as exemplified by the ferocious jaws of the metre-long bobbit worm, ready to pounce on unsuspecting fish by night from its lair in the sand, or the pulsating show of colours of the cuttlefish as it stalks a mesmerised crab. Other reef species team up in unlikely partnerships to improve the outcome of a hunt for fish amongst the coral, as shown by the pointing display of an octopus working in cahoots with a grouper.

Inevitably, the episode described how these cities are under threat, as warming oceans destroy the symbiotic relationship between the corals and the algae living within them, causing the corals to lose their algae, and become bleached.

Prolonged bleaching leads to the death of the colonies that build the reef, leaving behind lifeless ruins. Since 2014, an unprecedented series of consecutive warming events driven by climate change, have affected many reefs, including the Australian Great Barrier Reef, and annual bleaching is predicted to become more frequent, leaving no time for the reefs to recover between these extreme events. In the last scenes, narrator David Attenborough provides a glimmer of hope as he describes corals and other reef species spawning on mass to produce new generations of life to build new reefs.

The producers understandably visit the best and most pristine reefs in the world to capture these wonderful sequences. We must remember that the majority of coral reefs, especially those close to large human populations, are already degraded due to localised impact from over and destructive fishing, nutrient run off from urban and agricultural land, and coastal development. 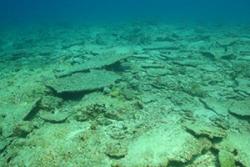 The future? A lifeless reef ruin. The most severely threatened reefs are in South-East Asia and the Atlantic, but even the Indian Ocean, Middle East and wider Pacific are now suffering from direct human impact. Estimates indicate that 75% of the world’s reefs are already threatened by local threats combined with rising sea surface temperatures and mortality from coral bleaching.

Even the remote reefs of the central Indian Ocean and north-west Pacific are now weakened, and vulnerable to disease. Assuming current trajectories, by mid-century bleaching episodes are predicted to be annual events affecting most reefs, and by the end of the century, atmospheric carbon dioxide levels will have changed ocean chemistry causing acidification, weakening the calcium carbonate skeletons of corals and slowing their growth . In their weakened state, these corals reefs will be further compromised by more frequent tropical storms and rising sea levels.

Resilient reefs may have some ability to resist climate change and adapt to the changing conditions or recover from these disturbances. Corals in the Gulf experience high seasonal temperatures of up to 35°C without bleaching, having adapted to these conditions over evolutionary time, although sustained high temperatures, such as those as experienced in 2010, can still cause them to bleach .

Some corals grow in near shore murky waters, where they may receive protection from high solar irradiation; even cloudy conditions can protect corals during warming events. Strong water currents and upwelling may also mitigate bleaching on seaward reefs.

Calm conditions, on the other hand, appear to enhance bleaching susceptibility. The remote and protected reefs of the Chagos Archipelago in the central Indian Ocean experienced 90% mortality in shallow waters in the severe warming event of 1998. They displayed a relatively rapid recovery over 12 years compared to many other reefs with rapid growth of branching and tabular corals. But consecutive warming events in 2015, 2016 and 2017 have devastated the shallow (less than 15 metres deep) reefs of these uninhabited and isolated reefs once more, and recovery may be more challenging this time.

What can be done? 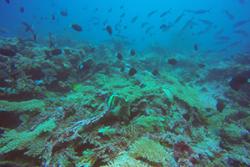 A healthy deep coral reef surveyed by Prof Turner and his team.Coral recruits can already be observed, probably from slightly deeper depths, but they are settling on dead collapsing colonies and will be washed off the reefs in storms. Successful recolonisation may depend on the availability of stable substrates and being able to compete with the algae that is replacing the live coral.

Although global action is required to reduce greenhouse gas emissions (and this will have little effect until mid-century), management intervention at a local level can build resilience on reefs by reducing direct human impact. In a study in Belize, localised fishing was controlled in a Marine Reserve in which grazing of algae by parrotfish was maintained, halving the rate of reef decline.

By maintaining the organisation and complexity of reefs, we can ensure that these reef cities thrive, even in the most threatened regions.

At the end of the Blue Planet II reef episode, thousands of groupers gathered at the drop off on a pristine and remote reef in French Polynesia, risking gatherings of hundreds of sharks to swim out into the tidal stream to spawn.

Off the Cayman Islands, in the central Caribbean, similar groups of spawning Nassau grouper were once heavily exploited by local fishers but are now legally protected. Acoustic techniques have been used to show that they are now once more gathering in their thousands to spawn.

As Blue Planet II made clear, our planet’s reefs are both beautiful and in peril. We do, however, still have time to save them – but only if we act now.