This article by Zoë Skoulding, Reader in English at the School of Languages, Literatures & Linguistics is republished from The Conversation under a Creative Commons license. Read the original article.

The name of Lynette Roberts may not be the first that springs to mind in the history of Welsh writing in English, possibly because her futuristic poetry of World War II still sounds new and strange. In her epic poem Gods With Stainless Ears she imagines postwar humans in a technologised, ecologically damaged landscape:

The white
Electric sun drilling down on the cubed ice;
Our cyanite flesh chilled on aluminium
Rail

If her poems echo from a retro vision of the future, full of references to minerals, metals and machines, they are also tuned to contemporary environmental realities.

Roberts wrote this extraordinary work in rural seclusion in Llanybri in south Wales, just across the estuary from Laugharne, where fellow writer Dylan Thomas lived intermittently. Her more famous neighbour had been best man at her wedding to the poet Keidrych Rhys in 1939, but Roberts herself was well known in literary circles. T.S. Eliot was her editor at Faber & Faber, while Robert Graves was a friend and mentor. She gives an account in her diary of tea with the Sitwells, in which she describes a conversation about the future of poetry readings and how poems might accompany films as “unseen voice”. Roberts had high ambitions for her writing and its place in a technologically changing world.

However, it is her emotional and political allegiance to Wales that fuels her poetry; Roberts came from a Welsh background although she was born and educated in Argentina. Her writing is sharpened by travel in that every sense impression is recorded as if it is wholly new and unfamiliar. She sees Wales with an outsider’s fresh eyes and hears its bilingual heritage with new ears, but she also brings to it a commitment to belonging, and to constructing a Welsh identity that is all the stronger for being one that she has chosen herself.

Much of Welsh literary culture had previously been focused on London – Thomas may have created the enduring fictional world of Llareggub, but he was arguably as much a Fitzrovian poet as a Welsh one. Roberts had a keener sense of her writing as entwined with daily village life. It was a tough existence, first with a husband away at war and then bringing up her two children, but it epitomised what she describes in A Carmarthenshire Diary as as “good real living”, in touch with the landscape and rural customs.

It was this setting that formed the backdrop to Gods With Stainless Ears. Her language fuses touch and sight into sound, as in her description of the estuary’s “Saline mud / Siltering, wet with marshpinks”, the dense clusters of sound also suggesting the influence of the Welsh-language poetry she was discovering as she learned the language.

The poem is scattered with quotations in Welsh, from the bardic tradition of poets like Dafydd ap Gwilym to Bible verses. Roberts explains in her notes that she did this deliberately, to draw attention to the “culture of another nation”. For her intended English readership, the inclusion of text in Welsh is a noisy disruption. Roberts’s poetry makes an important claim for Wales’s cultural distinctiveness, and it also shows how listening to an environment with full attention includes hearing the competing claims of perspectives one may not understand.

For Roberts, just as Welsh is strange to the English ear, so English is a noisy interference in Welsh. She notices how “OK saltates the cymric hearth and / BBC blares from Bermondsey tongue”, recognising the questions of power and ownership that are at stake in relations between languages.

Many of her poems listen to the non-human world, and particularly birds. Their cries are echoed in her writing, as in the poem, Curlew, in which a bird trapped in a room:

As here, the cries of birds in her poems often morph into sounds of war. This curlew, with “Europe restless in his wing beat” brings the noise of conflict into local, domestic space. In this sense, Roberts’s ability to listen across different spaces draws on recording technologies and their use in film and radio, prefiguring our own media saturation. Her Welsh locality is inextricable from its European and global relationships. 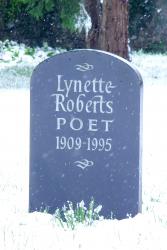 Headstone for Lynette Roberts in Llanybri churchyard in Wales: CC BY 3.0In the years following the publication of Gods With Stainless Ears in 1951, more conservative tastes tended to dominate British poetry, as Roberts’s dense linguistic experimentation faded from fashion and from view.

Roberts stopped writing poetry and became a Jehovah’s Witness. She died in 1995. Meanwhile, there has been a steady resurgence of interest in her work, although it remained out of print for many years apart from the occasional appearance in an anthology. By the time Patrick McGuinness edited her Collected Poems in 2005, and her Diaries and Letters in 2007, readers were ready for her at last.

The strangeness of her language has not diminished with the passing of time, but remains an invitation to listen to other languages, to other forms of life, and to the emerging sounds of what might be the future.