The graduation ceremonies at Bangor University celebrate the great achievements of hundreds of students each year.  They also provide an opportunity to recognise the achievements of individuals who have made a distinguished contribution to their chosen field of endeavour, through the award of an Honorary Fellowship.

Professor Morag McDonald, Head of the School of Environment, Natural Resources and Geography, was honoured to present Professor John Porter to the Vice Chancellor of Bangor University, Professor John Hughes, who bestows such awards.  Originally from Liverpool, Professor John Porter completed his BSc in Agricultural Botany in 1976 and his PhD in Plant Biology in 1981 at what was then the University College of North Wales. His PhD was supervised by the late Professor John Harper FRS CBE, one of Bangor’s highly renowned alumni. Professor Porter is now an eminent agricultural and climate change scientist currently based at both the Universities of Copenhagen and Greenwich.

Professor Porter is an internationally known scientist in crop and agricultural ecology. His main scientific contribution has been multi-disciplinary work in the response of crops to their environment with an emphasis on climate change and ecosystem services. He is possibly best known for his pioneering work in the development of crop simulation models, having written the first model of wheat in the 1980s, with further iterations bringing novel insights into the importance of climate variability in crop production. These models are now central to research identifying new types of crop with the capacity to both cope with the impacts of, and adapt to, climate change, to the benefit of agriculture globally. He currently sits on the independent steering committee of the Consultative Group on International Agricultural Research (the so-called CG system) on WHEAT. This is an international, collaborative effort to raise the productivity of wheat farming systems, to address the global threat of disease and help farmers in developing countries to grow their crops in conditions of increasing aridity. He brought the Secretariat and hub of the CG programme on Climate Change, Agriculture and Food Security to his University in Copenhagen, whose research seeks to address the increasing challenge of global warming and declining food security to help the world's poorest farmers become climate-resilient and ensure food-secure futures.

Professor Porter has made major contributions to the United Nations Intergovernmental Panel on Climate Change (the IPCC). He worked on the second, third and fourth assessments as a reviewer of agricultural, European and overall technical research. The scientific community that constitutes the IPCC was a joint winner of the Nobel Peace Prize in 2007. He led the workgroup writing the critically important chapter for the IPCC 5th Assessment on food production systems and food security. This report was the scientific bedrock of the COP21 agreement, signed December 2015 in Paris. In March 2016 he was awarded the Knight of the French Order of Agricultural Merit, which is made to those that have made extraordinary contributions to agriculture. The Order was established in 1883 by the then French Ministry of Agriculture and is one of the most important recognitions awarded in France. He was also appointed as a Fellow of the European Academy of Sciences in 2015, and serves as Editor-in-Chief of the European Journal of Agronomy.

According to the IPCC, within the next 30 years, food supply and food security will be severely threatened if little or no action is taken to address climate change and the food system’s vulnerability to climate change. Professor Porter’s research has made great strides in protecting the world’s most vulnerable communities against this imminent threat.

Receiving his fellowship from the Vice Chancellor, Professor Porter addressed the assembled graduates, parents, members of the graduation procession and other distinguished guests.  He told the story of how he came to study at Bangor University, having decided that a medical degree at Bristol University was not the right choice for him.  He was clearly very grateful for the second chance that Bangor had given him when he was accepted him onto the BSc Agricultural Botany degree. He encouraged the graduates of 2016 to feel great pride in their achievements and urged them to use their new knowledge and skills wisely for the benefit of others. 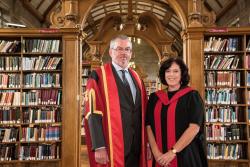