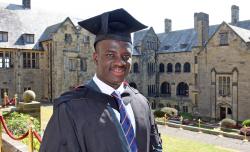 Julius Muyombya's life changed when he met a Llandudno pupil who was on an African outreach project.

Julius was picking litter and living in a one-room shack in Kampala, Uganda, when he met Christine Ramsay. She was in the country with other St Davids College, Llandudno students on an outreach project and said she had been struck by what was the young boy's "spark".

She returned home determined to find a way to bring the then 11-year-old to north Wales. Her idea was supported by Rev. Tim Hall who supported her idea and within a year and a half, got him a birth certificate, passport and visa. St David’s College agreed to give 100% sponsorship to Julius, with his other financial needs met by a group of parents and friends called The Friends of Julius.

Julius remembers when he first arrived at the school, he said: "I knew I would have to work harder than any other student at St David’s College.

"I had years of education to catch up on and I had a new language to learn quickly so that I could access the teaching."

At first his GCSE grades were predicted to be mostly U’s.

"I felt terrible as I felt I was letting everybody down, so I decided I had to work three times harder than everyone else," he said.

Julius's sheer determination meant he went on to achieve eight GCSEs grade C and above. A remarkable achievement for a teenager who only started receiving a formal education just three years before. He again exceeded expectations in the Sixth Form and was awarded a scholarship to Bangor University to read Business and Law. And his pioneering entrepreneurial project in Uganda meant that he was awarded the overall BTEC Business and Enterprise Student of the Year in 2016. At Bangor, he thrived and during his time there served as a course rep, a peer guide and after joining Enactus, became President in his second year.

Graduating with a First Class Degree in Business and Law this week, Julius said: "It is a dream come true.

"This couldn't have been possible without the support from those who have been there for me since day one.

“I want to thank St David’s College for giving me the best foundation and opportunity to flourish and finally, thanks must go to Bangor University for being an outstanding institution with exceptional student services.

"Studying at Bangor has been an incredible experience, I think it's a wonderful University and the local community have been fantastic with me.

“It feels amazing and satisfying after three years of hard work. It always seemed impossible at the beginning, but self-discipline and hard work helped to achieve the end goal. Therefore, I feel grateful, happy and looking forward to close this chapter and begin a new one.”

Dr Siwan Mitchelmore, Senior Lecturer in Business and Management, said: “Julius is a polite, determined and hardworking student and was a pleasure to teach, he is committed to working to achieve his full potential. As well as his excellent academic accomplishments, he has immersed himself in many employability opportunities particularly those associated with enterprise skills, most notably his role as President of Enactus Bangor and representing the Business School at national and international competitions. Congratulations to Julius, we wish you the very best for your future.”