Gwenlli Thomas, 21, from Chwilog (near Pwllheli) has graduated with a BA Sociology and Welsh degree. 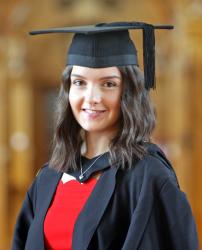 Background:
I was raised on a farm in Chwilog, close to Pwllheli. I received my primary education at Ysgol Chwilog before moving on to Ysgol Glan y Môr and Coleg Meirion-Dwyfor at Pwllheli. I was certain from a young age that I wanted to study Welsh at university – I really enjoyed Welsh lessons at school and the language and its culture are really important to me. I decided to study Sociology with Welsh after the pleasure I had studying it at A-Level and the fact that it’s also a varied subject area that can open a lot of doors.

How does it feel to be graduating?
It’s a bittersweet feeling! I’m incredibly proud that all the revision has paid off and I’m thrilled to be able to celebrate with my friends and family but it’s also sad to think that my time at Bangor University is coming to an end.

Why Bangor?
The warm and friendly environment I experienced during an Open Day was certainly a factor that led me here. I was also aware of the national standing that the School of Welsh and Celtic Studies has and that the standard of the education I’d get there would be second-to-none. I also knew that I wanted to study Welsh in both creative and professional contexts and I saw that the School offered modules that would allow me to do exactly that and under the tutelage of the very best experts! I also decided to study Sociology at Bangor due to it being available entirely through the medium of Welsh. I was particularly drawn to the language planning modules that the School offered.

Working whilst studying:
I worked one or two days a week as a Casual Assistant for Grŵp Cynefin housing association during my studies. I worked as part of the Customer Services team, the Housing team and the Maintainence team. Those experiences gave me an insight and an understanding of the nature and structure of an organisation such as this. It raised my self-confidence and allowed me to develop a plethora of valuable skills as I embark on my career.

Clubs & Societies:
Another factor that drew me to Bangor was the buzz generated by UMCB. I was a member of UMCB during my three years here and my time at the university would not have been as good as it was if it hadn’t been for the social events arranged by the committee and the Cymric. I was also a member of Aelwyd JMJ and the Aelwyd was certainly played a central role in my university life.

Highlights:
It’s difficult just choosing one! I really enjoyed all the inter-college events and the rugby trips to Edinburgh and Dublin with UMCB. Another great experience was being part of the Aelwyd JMJ choir that scooped up all the choral competition events at the Urdd National Eisteddfod in Cardiff Bay this year. Another definite highlight was being told that I was one of five recipients of the Dr John Robert Jones prize and that Erin, one of my best friends, had been awarded the Gwyn Thomas Excellence Award too.

The future:
I’m going to take a year’s break from education in order to gain some work experience and to decide which Masters course I’d like to apply for 2020 entry. Last month, I accepted a six-month contract as an Admin Officer within the Housing team at Grŵp Cynefin. I also hope to do some travelling.