‘Risk-taker’ Kate graduates with a first 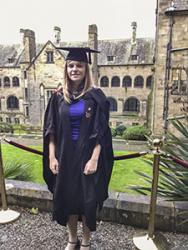 Kate Maura JonesA mature student who has taken an alternative approach to life and education feels like she has ‘finally accomplished something’ after graduating from Bangor University this week.

Kate Maura Jones, 28, from Llanberis graduated with a First Class BA Criminology & Criminal Justice degree despite being diagnosed with dyslexia and dyspraxia, and juggling work and basketball commitments.

Kate left school at sixteen and entered the world of work. One day she suddenly decided that she was going to leave the UK and travel to Australia on her own. After spending two years working and traveling in Australia, she then made the decision to go to university.

Having left school at sixteen, Kate felt that coming to university was a big risk. She always knew that she could have achieved much better grades at secondary school, but despite giving it her all, Kate felt that she was destined to be an E/D grade student. When she started University, she decided to be screened for specific learning difficulties. It quickly became apparent that she was both dyslexic and dyspraxic. This diagnosis provided her with ‘academic confidence’ as she then knew that her below par grades could become a thing of the past with the right support.

Kate explained: “I began receiving support from the Miles Dyslexia Centre from the very beginning of my course. I was designated a tutor, Fiona Zinovieff, who has been with me throughout the three years. The support given by the Centre as a whole has been outstanding, but in particular, Fiona. Her alternative teaching style and learning strategies have given me the confidence to write, which is something that I have never had.

“My experience of education is now a positive one. I have had so many positive experiences through being a Bangor University student. I have been a part of the Women’s Basketball Team for the whole three years, including its Vice-captain. This provided me with a release from day-to-day academic work, as everybody needs to put their assignments down and have some fun from time-to-time! Basketball has now become a big part of my life, and I honestly believe that my team mates and my coach have been instrumental in keeping me focused on my goals, both on and off the court. Basketball took up a lot of my time during my studies, but thankfully, the rewards of being part of such a fantastic club outweighed the negatives of having no spare time.

“I worked throughout my degree, I didn’t really have much of a choice. I was an instructor at Zip World Velocity, which was great, but I had to cut down my hours during my third year. This reflected in my grades as my average went up from 69% to around 81%.

“Acquiring new learning strategies to overcome the difficulties of dyslexia/dyspraxia and time management was often difficult, but basketball helped provide some structure to the day. I treated University like a job. I would be in the library or a learning space for 9am, and I would leave at 5/6pm so I could go to basketball training.

“The staff at the School of Social Sciences have been absolutely amazing. Every single lecturer that I have had has invested a 100% in his/her students, and that’s what makes it such a great School.

“I’d eventually like to work in counter-terrorism and/or intelligence. It’s a pretty difficult sector to break into, as employers often ask for certain qualifications as well as relevant experience. At the moment my plan is to complete a Masters in Law and Criminology and see what opportunities arise during/after that.

“To quote the late, great Muhammad Ali, ‘He who is not courageous enough to take risks, will accomplish nothing in life.’ Coming to university was always going to be a big risk, but it was definitely one that was worth taking.”