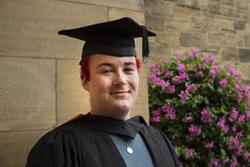 Jake Sallaway-CostelloNot everyone could cope with working full-time alongside studying for a degree, even fewer would be able to travel the world and fit in some voluntary work on top; but one dynamic Bangor University student did, and he graduates this week.

Jake Sallaway-Costello, 20, from East Northamptonshire received a BSc (hons) Psychology with Clinical and Health Psychology degree from one of the country’s leading Psychology departments.

Growing up in a reasonably rural community, Jake had always planned on studying music until he was fortunate to get a place at the highly-acclaimed Northampton School for Boys, where the social sciences teachers invigorated his passion for psychology.

Jake recalls his time at Bangor: “My course is regulated by an accrediting body, the British Psychological Society, thus all accredited courses across the UK are quite similar. The School of Psychology at Bangor University, however, offered an enormous range of co-curricular opportunities, trips, extra-curricular lectures, work experience, internships and paid work that other universities couldn’t match. When you study psychology at Bangor, everyone knows who you are and has an interest in what you are doing; I didn’t get this sense of close-community at other universities.

“I started taking Welsh lessons from the week I arrived in Bangor, and have just completed the third year of my course. Last year I won the Dysgwr y Flwyddyn – Learner of the Year award from Coleg Menai-Llandrillo, and have since been awarded nationally recognised qualifications in the Welsh language.

“I participated in many voluntary projects during my degree, such as the Profi project, Aspirational Mentoring and Peer Guiding. I also undertook lots of voluntary work with external organisations, which ranged from teaching people with disabilities to ski, to working with victims of sexual violence.

“In the summer between my second and third year I did an internship with the Careers and Employability team working on a marketing and communications project. This allows students to gain insight of the graduate workplace before they graduate. I worked as part of an energised team and was afforded the opportunity to explore my many marketing ideas. I also completed a research assistantship with the School of Psychology in a project partnered with Food Dudes Health, where I was able to get an idea of what it really means to be a psychologist.

“In my second year I travelled with the School to Krakow, Poland to visit Auschwitz Concentration Camp and Oscar Schindler’s Factory, in order to complement our social psychology module and see the power of social influence in the real world. This sparked my interest in the field and I have since travelled to Berlin, Germany to examine the role of social influence in the Cold War, and have recently returned from South Africa where I was gaining insight into the psychology of apartheid. In the same year I also travelled to the United States on a scholarship with an external organisation to learn about the socioeconomic role of international aid. Most recently, I toured China with a team of dynamic international students after our team won the International Education Centre’s Culture Challenge. In additional to touring five cities, we met students at Bangor’s partner universities and saw the new “Bangor College” in Changsha.

“One of the many highlights of my time at Bangor was completing the Bangor Employability Award. The BEA allowed me to record my achievements, and evidences the broadened skill set that I can bring to an employer. In addition to getting the highest level of the award, I also broke the record and achieved the highest performance in the history of the scheme. My BEA transcript lists all of my successes and I can use this to improve my prospects in the graduate workplace.

“I worked full-time throughout my studies. My student loan covered about 60% of the rent, so the shortfall and every other cost I had to meet myself. Luckily, getting a job in Bangor is easy as there are so many opportunities around. Needing to work full-time alongside being a full-time student was regrettable, but now my CV boasts a range of employability-enhancing experiences which other graduates can’t beat.

“It’s satisfying to bring my bachelor degree to a close, whilst reflecting upon all of the amazing experiences I’ve enjoyed in Bangor. At the same time, graduation marks the beginning of my Masters degree and all the opportunities I’ll pursue with it.

“Long-term I’d like to explore various research topics in health psychology, and even longer-term I would like to immigrate to the United States. Maybe in ten years I’ll be an accomplished researcher at an American university, but for now my plan is to do research at home, in Bangor.”