The first day of the NUS international students’ conference was marked with speeches, seminars, and workshops. The conference started with some opening remarks from the NUS International Students’ Officer (ISO) Yinbo Yu, who also introduced the first speaker of the day, Abdi Suleiman. Suleiman opened his speech with some historical facts about Sheffield, home of his University, and coincidentally, the venue of the conference. Elements about importance of non-differentiation between international students, and how internationalisation shouldn’t be taken for granted – be in the university or the community – were key themes in his speech.

The first workshop of the day was “Leadership in student movement” by Riddi Vishwanathan and Jaspreet Singh. The workshop commenced with in insight of how their journeys started and some tips to empower international students to get involved with university and union activities. Key themes of the workshop included encouraging international students to take part in Students’ Union activities, as getting involved would show that we (international students) matter to the Union; and the necessity of knowing each other’s struggles (to get to the university), so that we can show solidarity and help each other. The workshop also cleared up misconceptions about being involved in SUs and volunteering projects.

Following the workshop, a toolkit was launched, which aids and encourages SUs to self-reflect and self-assess. The toolkit is an annual self-assessment tool that poses questions relevant to internationalisation of universities. It is divided into 2 parts, Part A and B, with part B being more self-reflective and assessing. NUS also would provide guidance and support with the toolkit as well. The toolkit is also set to have regular annual updates, and is also available in Welsh for the Welsh Unions. The launch was followed by a panel discussion with UUK, AOC, and NUSUK staff, along with the NUS ISO. The discussion highlighted the sacrifices of international students by moving thousands of miles away from their home to study in a UK institution, and impressed the face that due to this, we will take every opportunity to involve ourselves in the university – the SU needs to play a key role in giving us the opportunities. NUS ISO Yinbo Yu implored that we also need to work towards bridging the gap between us and the community we live in – to help them in any way possible. The key questions raised revolved around visas having too little time left after study to find a job, and the awkwardness of having to declare that we need a visa when applying for jobs in the UK, which puts us a disadvantage when job hunting. Many delegates also raised concerns about how international students are viewed as ‘cash cows’ by universities -  they are only seen to bring money into the university, and are neglected otherwise – and whether there are ways to make universities realise we are not just a way for universities to make money.

The last workshop of the day was the impact of Brexit by NUSUK staff Mike Day and Holly Staynor, which summarised the Brexit procedure, voting, the process of leaving the EU, and so on. The workshop impressed that the UK will have to reinvent itself on the international stage. Further discussions were on Erasmus+, how exchanges will be affected, and whether the UK will preserve Erasmus or come up with something similar to keep exchanges afloat. Other points of information revolved around how Brexit will make it difficult for students and Universities alike, in terms of monetary support from the EU. The workshop also outlined objectives of the NUS, which include maintaining mobility within the EU in terms of student exchanges, pressurising the government to remove international students from the net migration figure, and continuing international student campaigns such as the social media hashtag, #studentsoftheworld.

The first day of the conference ended with the international gala dinner, where winners of the prestigious NUS awards were announced and presented. What made it noteworthy was that Charu Dada, student of Bangor University, emerged the winner of the International student of the year award. The presentations were followed by informal hustings of the NUS ISO nominees, which concluded day one of the conference.

The second and last day of the conference commenced with the accountability panel for the current NUS ISO and National Executive Committee (NEC). Questions were raised about #studentsoftheworld campaign, Brexit, MAC, work on international student mental health, and post study work visa issues. Here, concerns were also raised by the ISO and other students about how universities monitor attendance of international students, and that it isn’t fair or nice of universities to be ‘watchdogs’ for the government. It is noteworthy to mention that this conference had more attendance than previous international conferences.

The accountability panel was followed by elections for the post of International Students Officer, and the National Executive Committee. All ISO candidates made their points about Brexit and post study work visa, and all NEC candidates expressed their enthusiasm in helping the elected ISO with their ideas and campaigns.

The final part of the conference was Policy debates, where delegates debated and questioned motions and amendments submitted to the conference. All motions and some amendments were passed. It is vital to mention that almost all motions and amendments were concerning difficult and inaccessible visa rules, time left on visas after completing studies, and insufficient and inefficient support for international students from Student Unions, and student mental health. One of the significant amendment of motion was regarding educating international students about their general and voting rights in the UK in light of the Brexit campaign and general elections. 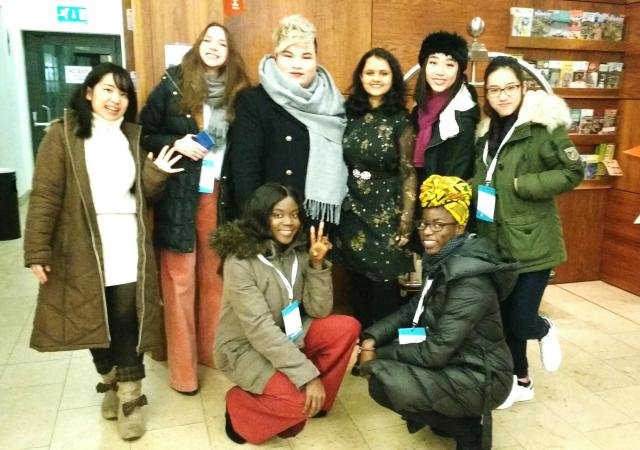