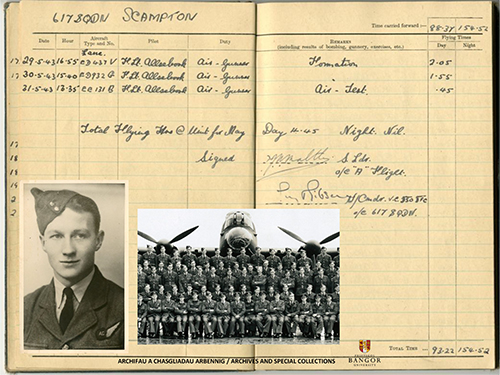 Photo: Flying log book belonging to Sergeant Ivor Glyn Jones which gives details of the date, hour, aircraft type and number and the pilot of each flight, plus remarks on the purpose or destination - signed by Guy Gibson, W/Cmdr.VC. DSO. DFC. O/C 617 SGDN.

Ivor Glyn Jones of Rallt, Rhosmeirch, Anglesey, 1054939 Sergeant [Air Gunner] served in the 617 Squadron under Guy Gibson during the Second World War (although he was not one of the men who took part in the famous ‘Dambusters’ project). He was announced missing, presumed dead, on the 16th September 1943.

On the 21st March 1943, 24 year old Wing Commander Guy Gibson was instructed to form a new squadron to undertake a special project, the ‘Dambusters’ raid; the Squadron was 617 and the top-secret mission, codenamed ‘Operation Chastise’, called for the aircraft to strike dams in the industrial heartland of Germany. In total, 19 Lancaster bombers crewed by 7 men each departed on the 16th May 1943. The Möhne and Eder dams in the Ruhr Valley were targeted and successfully breached, flooding a wide area and inundating many factories and damaging or destroying power stations, transport links and other facilities.

After the raid, the 11 surviving Lancasters returned to their home station of RAF Scampton. The operation was successful but came with a heavy cost: 53 men were killed, 3 became prisoners of war and 8 aircraft were lost. 33 of the aircrew who returned were decorated, with Gibson receiving the Victoria Cross for his outstanding bravery and leadership.

Further material relating to Sergeant Ivor Glyn Jones and 617 Squadron can be seen in the Archives and Special Collections Department.

The Archives are responsible for the care and storage of the early College Records as well as our Archives Collections and General Collection of Bangor Manuscripts. All of these manuscript collections are bound by one common factor, their relevance to the history, people and topography of North Wales. However, their subject areas are wide ranging and are of national as well as local historical interest.