Archive of the Month 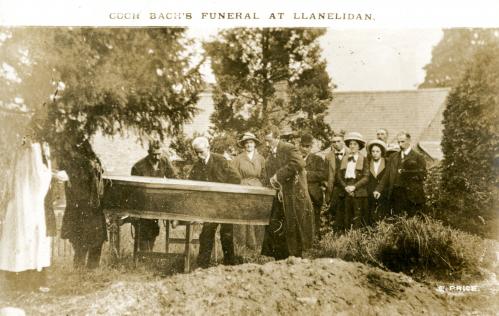 He was baptised John Jones but it was as Coch Bach y Bala [The Little Redhead of Bala] or to be more correct Coch Bach Llanfor that he became more famously known. He was a thief and a burglar but not a very good one since he spent a lot of his time in prison. But his main claim to notoriety was his ability to escape from either police cells or prison. In 1879 much to the discomfort of the staff of Ruthin Gaol he escaped by calmly walking through the front door of the prison! By 1913 he had spent nearly half his life behind bars and though he was sixty years of age he still could not give up his life of crime. In June of that year he was sent once more to prison for breaking into a solicitor’s office in Bala. Remembering his ability to escape from prison the warders at Ruthin Gaol kept an eagle eye on him but to no avail since at the end of September he managed to escape and was on the run once more. On October the 6th he was seen near the village of Pwllglas by a 19 year old student, Reginald Jones Bateman, Eyarth House who was out shooting partridges. He called on Coch Bach to stop but he refused and tried to make his way to a copse of wood. Bateman fired at him and hit him in the leg. Due to the fact that the shot had severed the main artery and after being on the run without proper clothing or food he was in a poor state of health he died within a few minutes. When the news reached Bala that Coch Bach had been shot there was a feeling of sadness and of anger that he had lost his life in such a way. Despite his wrongdoing there was some sympathy for him in Bala. Bateman was charged with manslaughter but the charge was thrown out in the Magistrates Court. On October 13th, 1913 Coch Bach y Bala was buried in Llanelidan churchyard with a local photographer, Lewis Edwards Price, there to record the event.