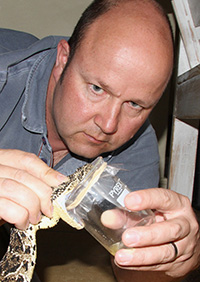 My research interests span a wide range of topics in evolution, systematics and ecology, using primarily snakes as a model system. Current and recent topics have included the evolution of venom composition and its selective drivers, the origin of snake venom systems, species delimitation in snake species complexes, the evolution of warning signals and mimicry systems, biogeography, phylogeography and ecology.

I am interested in supervising postgraduate students in a range of topics in herpetology and toxinology, in particular:

Please drop me a line if you are interested and want to explore possibilities.