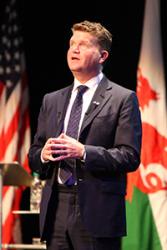 Ambassador Barzun Students from Bangor University and local secondary schools heard the US Ambassador to the UK, Matthew Barzun, talking about the ‘special relationship’ between the US and the UK at a special event at the University's Pontio centre today.

Ambassador Barzun discussed the relationship between the UK and the US – past, present and future - and answered questions from the audience about the relationship and the challenges facing both countries, individually and collectively.

The Ambassador, who had learnt some Welsh for a previous visit to Wales, took the opportunity to say a few phrases in Welsh expressing his delight to be visiting Bangor and to further strengthen the ties between the United States and Wales.

Drawing on examples from joint work in international diplomacy between the US and UK, and his own experiences since being appointed to the role three years ago, the Ambassador then argued that the special relationship remained not only relevant but necessary if both countries are to address the world’s big challenges in the months and years to come.

Ambassador Barzun said: "In the face of global trends and unexpected political shifts on both sides of the Atlantic, it is easy to see ourselves as powerless to affect the trajectory of our lives, and yet the power to change in a democracy lies, as it always has, in ourselves. 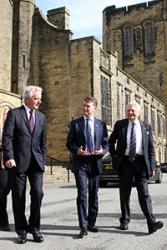 Ambassador Barzun is greeted by University Vice-Chancellor Professor John G Hughes and Lord Dafydd Elis-Thomas, the University's Chancellor.“The people of the US and the UK have shown over generations that by listening to each other and working together in partnership, we can rise to meet our greatest challenges."

Bangor University's Vice-Chancellor, Professor John G. Hughes said: "Ambassador Barzun looked back at the past seven decades to demonstrate how individuals, communities and nations can build bridges - a theme particularly relevant to Pontio which  means "to bridge" in Welsh."

The event coincides with the 70th anniversary of Winston Churchill coining the phrase ‘special relationship’ to describe the exceptionally close political, diplomatic, cultural, economic, military and historical relations between the UK and the United States.