The ocean represents a vast and largely untapped energy resource, which could be exploited as a form of low carbon electricity generation. However, in order to realise this potential, and minimize environmental impacts, we must fully understand the nature of the resource, and the feedbacks between energy extraction and the marine environment. 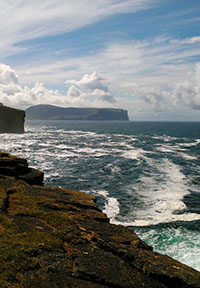 The aim of the Marine Renewable Energy research group is to quantify the wave and tidal energy resource at a variety of time-scales, and quantify the impacts of energy extraction in relation to natural inter-annual and inter-seasonal variability. We achieve this through application of advanced modelling methodologies, including three-dimensional tidal models, spectral wave models, and advanced non-linear wave/tide interaction model coupling. We simulate energy extraction by arrays of devices, at a variety of spatial scales from the North Atlantic to the interaction between devices at array scale. Hence, we can investigate the feedbacks between array operation, the resource, and associated sedimentary processes.

We published the world's first paper on the impact of tidal array operation on sediment dynamics (Neill et al., 2009), complemented by a popular science article published in Green Light for Marine Renewables?. We have advanced such environmental impact studies further through three-dimensional modelling (Neill et al., 2012), and our currently funded EPSRC SuperGen project EP/J010200/1, in which we are investigating this impact in relation to natural variability (Lewis et al., in review). This is complemented by a Fujitsu/ High Performance Computing Wales PhD studentship, which is focussed on how tidal energy exploitation affects the nature of the resource. Our research on resource quantification has also been supported by the Low Carbon Research Institute - a &pound34M European-funded project in partnership with industry.

We have published pioneering work on the role of tidal asymmetry in site selection for tidal energy arrays, demonstrating that the environmental impact of such arrays will be minimized for symmetrical sites, compared to sites which experience strong asymmetry (Neill et al., 2009). Our high resolution tidal model studies have been applied to understand the impact of potential tidal energy extraction sites in the Bristol Channel (Neill et al., 2009), the Alderney Race (Neill et al., 2012), the Skerries to the northwest of Anglesey where the world's first tidal energy array is being developed (Robins et al., in review), the inter-island channels of Orkney (Neill et al., in press), and the Bay of Fundy (Pelling and Green, 2013).

Our recent wave model simulations of the northwest European shelf seas have demonstrated the variability of the wave power resource over a 7 year period, and we have quantified regional uncertainty in this resource (Neill & Hashemi, 2013). We are currently extending this work to incorporate uncertainties in the wind forcing (Goward Brown et al., 2013), wave/tide interaction (Hashemi et al., in prep.), and applying to much higher resolution and longer (decadal) time periods to understand the variability of the wave resource in the Pentland Firth and Orkney waters in relation to climatic indices (Neill et al., in prep.). Hence, we are able to assess environmental impact in relation to natural variability which will inform policy decisions in this as yet unregulated area.

Future tidal power plants are expected to have an operational life of 50-100 years, thus it is likely they will experience sea-level rise. Our modelling studies have demonstrated that future sea-level rise will increase the maximum extractible energy from the Minas Passage (Bay of Fundy, Canada) by up to 2GW, showing that the amount of extractable energy that can be expected from a free stream tidal power plant may not remain constant, as the tidal response to sea-level rise can be enough to change the current velocities (Pelling & Green, 2013). We have additionally simulated how combined sea-level rise and tidal barrages might influence the hydrodynamics of the northwest European shelf seas (Ward et al., 2012).

Our developing research strands in marine renewable energy include array optimisation using genetic algorithms and dynamically-adaptive meshes. We are also currently assessing how the development of offshore energy structures, including wind farms, could affect the transport and connectivity of shellfish larvae.