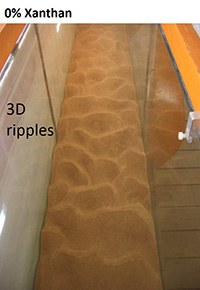 The work of the Seabed Dynamics group aims at identifying the interplay between geological, sedimentological and hydrodynamic processes, which influence the seabed at various spatial and temporal scales. 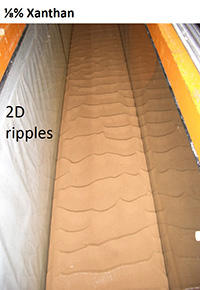 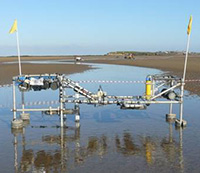 Flow and sediment transport predictions from sedimentary structures found in modern environments and within the geological record are impeded by an almost complete lack of process-based knowledge of the behaviour of natural sediments that consist of mixtures of cohesionless sand and biologically-active cohesive mud. Indeed, existing predictive models are largely based on non-organic cohesionless sands, despite the fact that mud, in pure form or mixed with sand, is the most common sediment on Earth, and is also the most biologically active interface across a range of Earth-surface environments, including rivers and shallow seas.

State-of-the-art laboratory and field technologies are used to measure the erosional properties of mixed cohesive sediment beds and the formation and stability of sedimentary bedforms on these beds, integrating the key physical and biological processes that govern bed evolution. This research has demonstrated the critical role of biological processes, in particular the cohesive products produced by micro-organisms such as diatoms, which can be grouped together under the term Extracellular Polymeric Substances (EPS). Remarkably, mere traces of xanthan gum (a polysaccharide used as a proxy for EPS) within the sand bed (less than 0.1%) were sufficient to delay bedform development and decrease equilibrium bedform height and length relative to a substrate that was free of xanthan gum. This suggests that biological cohesion is more important than physical cohesion, and reinforces that sedimentological process models should refocus on biostabilisation processes. 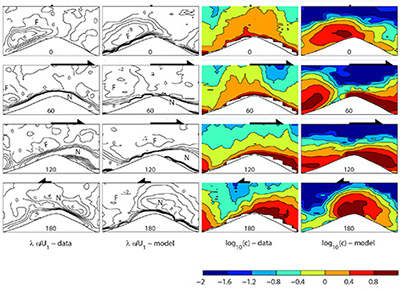 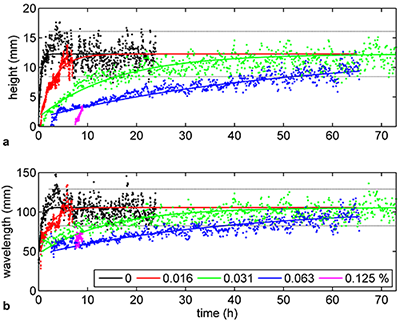 Exceptionally high, straight-crested and trochoidal sediment waves have recently been observed on shelf seas world-wide, and reach heights of up to 36 m in the Irish Sea. It is uncertain how the interplay between geological, biogeochemical and hydrodynamic processes influences the migration and extreme growth of these sediment waves. The Seabed Dynamics Group investigates the role of sediment granulometry and sediment availability on both "extreme" and "normal" sediment wave development and investigate the potential association of methane derived carbonate formation with extreme sediment wave growth. Partners include University of Liverpool, Universität Basel and Università degli Studi di Genova. 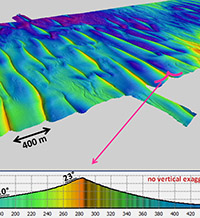 With World War I's commemorations, UNESCO now protects WWI's submerged heritage. UNESCO highlighted the lack of comprehensive research on shipwreck and is concerned about shipwreck site stability and the risk for divers (UNESCO, 2014), whilst the polluting potential of shipwrecks was recently recognized universally as a serious hazard. It is estimated that in Welsh waters alone, at least 100 vessels sank during WWI. The work of the Seabed Dynamics group is revealing the complex interaction of shipwrecks with the currents, to mobilise an otherwise immobile mixed seabed and produce individual scour vortices extending hundreds of metres beyond the wreck. These fluid-object interactions are difficult to reconstruct, and we hypothesise that this is due to the constantly changing mixed-sediment seabed. 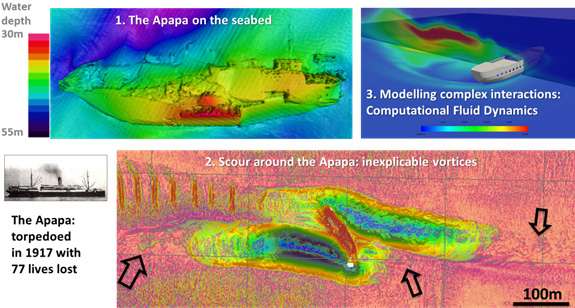 The Impact of Seabed Dredging

When analysing shelf seabed morphological behaviour, it is largely ignored that this seabed commonly consists of sand and gravel mixtures - often palaeo-glacial deposits. Advances in predicting sediment transport in such mixtures focus on rivers, despite the fact that many marine sediment processes cannot be explained using conventional bedload transport predictors.

Sand and gravel in a mixture leaves larger grains "exposed" and smaller grains "hidden", changing the efficiency of the flow to mobilise different grain size fractions ("hiding-exposure" effect). As the flow entrains sediments and redistributes them, the mixture changes, as will the "hiding-exposure" effect, depending on flow asymmetry and strength. This leads to varying depths of the "active layer", from fully armoured to fully mobile. These changes are known to significantly affect bedload transport and morphodynamics, but at present remain to be quantified in shelf sea environments. The work of the Seabed Dynamics group involves experimentally parameterising changes in bedload transport for various mixtures of sands and gravels, and modifying existing bedload transport formulae to reflect complexity in mixed beds and test model outputs with offshore data. 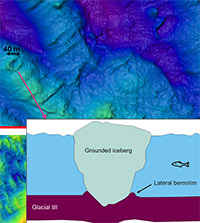 The evolution of past glacial landscapes in the Irish Sea is reconstructed from sediment core and geophysical data with implications to the de-glaciation mechanisms of the NW European Shelf. Forcing of ice behaviour is likely a complex interplay of external drivers (e.g. climate warming, sea-level rise, mega-tidal amplitudes and reactivation of North Atlantic meridional circulation) and glaciological factors (e.g. bed topography, basin width, thermal regime of subglacial bed, over-extension of ice, ice flow reorganisation). This interplay between driving factors of ice dynamics need considerable attention in forecasting the behaviour of rapidly retreating ice streams in Greenland and the Antarctic.