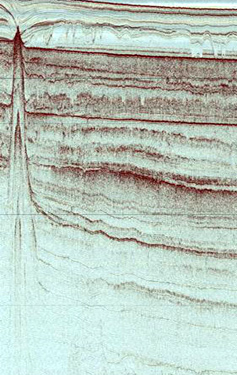 Over the last few years, geophysicists from SOS Bangor have been involved with projects that aim to determine the extent and causes of climate change over the last 200 ka in East Africa, specifically Ethiopia, within the broader context of investigating links between palaeoclimate and human evolution and migration.

The geophysics group has been involved with two NERC funded projects in this regard, one focussed at Lake Tana in the northern Ethiopian Highlands and the second at Chew Bahir, a seasonal lake situated on the Ethiopian-Kenyan boundary within the rift valley zone. 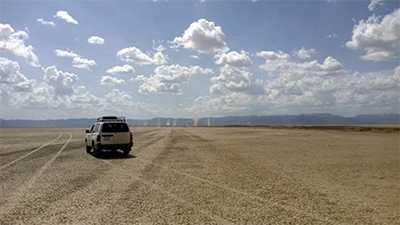 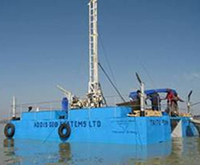 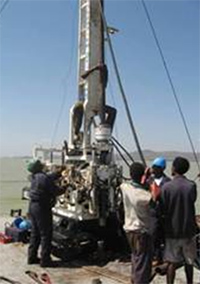 The drilling platform and operations on Lake Tana (Addis Geosystems)

Lake Tana, in the highlands of northern Ethiopia, is the source of the Blue Nile, one of the world's great rivers. Surprisingly, very little is known about the age and history of this lake. Our seismic and core data show nearly 100m of accumulated sediments in the basin, interrupted by reflectors that we interpret as desiccation layers. The data show that the lake dried out at 16,000 years ago, and at apparently regular intervals during the later stages of the last Ice Age. We originally hypothesized that the lake dried because of intense droughts lasting one or two hundred years, caused by disruption of Africa's monsoon climate when iceberg-laden meltwater from North America flooded the North Atlantic - the Heinrich events. In a NERC-funded project, PalaeoTana, we aimed to test this hypothesis by obtaining a well-dated climate record from a long sediment core.

As part of that project, we successfully obtained over 50km of Seistec Boomer seismic reflection data. This is some of the highest quality boomer data that we have collected here at Bangor over the last 50 years. The data indicate three main phases of depositional environment and clearly show erosion events, indicative of extensive desiccation. In addition to the seismic data, a 96m core from the northern basin of Lake Tana, 5 km from the shore, in 10m water depth was acquired. We used a Longyear diesel-powered wireline drilling system, with a triple tube core barrel. The drill was operated from a 15-ton purpose-built platform, constructed at the nearby port of Gorgora by Addis Geosystems Ltd. Pictures of the drilling operation can be seen here.

The core was scanned at high resolution using X-ray fluorescence, X-ray and colour imagery, geophysical and magnetic core-scanning technology. The resulting datasets continue to be the focus of detailed investigation and are being interpreted by comparison with sediments of the known desiccation event at 16,000 years ago. Dating the sediments by appropriate methods including radiocarbon and post IR luminescence and subsequent Bayesian modelling has allowed a precise age-depth model to be produced.

Geotechnical consolidation testing incorporating acoustic transducers has then allowed us to ascertain the appropriate seismic velocity so that we have been able to convert the seismic data from the original travel time basis (as shown on the records) to depths and hence ages, using the age-depth model.

The final goal of the project is to add to our understanding of how palaeoclimate has varied in the Ethiopian Highlands over the last 150 ka. We hope to use our palaeoenvironmental reconstruction to investigate the relative influence of various forcing factors, notably local insolation changes, Indian and East Atlantic ocean moisture supply, and high latitiude events such as Heinrich and D-O cycles. Wider still, this study covers the period from near the first appearance of Homo sapiens sapiens (at Herto) and the initial departure of anatomically modern humans from the African continent; as such this study is highly significant in providing a well-dated record of environmental change from continental Africa.

This project is part of a wider, over-arching project that includes field sites throughout Africa, The Hominin Sites and Paleolakes Drilling Project (HSPDP): Using Scientific Drilling to understand the Paleoclimate Context of Human Evolution and is part of the International Continental Drilling Project (ICDP). However, the UK contribution to the project focusses exclusively on the Chew Bahir site and is mainly funded by NERC, as part of the A 500,000-year environmental record from Chew Bahir, south Ethiopia: testing hypotheses of climate-driven human evolution, innovation and dispersal project.

The role of geophysics within the project is to provide a stratigraphic context for the core. Our experience from Lake Tana is that geophysical data is not only required as a means of site investigation in the choosing of the best core site; it is important scientifically in providing a geological development model that is initially independent of core data.

The proposal abstract is included here as a brief overview of the project:

The Chew Bahir Drilling Project: a Plio-Pleistocene climate record from the southern Ethiopian Rift, a crucible of human evolution

A long core record from the Chew Bahir (Weyto) basin of southern Ethiopia has the potential to address several major scientific issues. Deep drilling information from the transition between the Main Ethiopian and Kenyan Rifts could answer key questions about continental rifting processes, including the growth and linkage of basins and flanking uplifts. The area bridges a major biogeographic divide between contemporary but very different Plio-Pleistocene faunas, represented at sites only 200 km apart. The proposed drill site lies 90 km SW of Konso, which contains the oldest known Acheulean handaxes (~1.7 Ma), over 7000 mammalian fossils, and co-existing Australopithecus boisei and Homo erectus ~1.4-1.6 Ma. In the central part of the Chew Bahir Basin, to the north of the proposed drill site, sedimentary deposits sample the Acheulian-Middle Stone Age transition, a key shift in human behavioral evolution. The adjacent Omo-Turkana basin is well known as a critical region for studying human evolution. The southwest Ethiopian highlands, just NNW of Chew Bahir, are hypothesized to have been a refugium during hyper-arid intervals of the Late Pleistocene, where a bottleneck population of anatomically modern hunter-gatherers developed the skills necessary to survive and eventually spread across the Old World. Terminal Pleistocene and Holocene innovations and technology transfer in SW Ethiopia and NW Kenya shaped distinct pathways to food production in eastern Africa and the Horn. A Plio-Pleistocene climate record from Chew Bahir, achievable in less than 400 m of core, would allow tests of hypotheses linking human evolution to climate and palaeoenvironmental variations, and would be of great value to ongoing palaeoanthropological and archaeological investigations in the adjacent Turkana Basin and in the rest of the Ethiopian highlands and rift system. 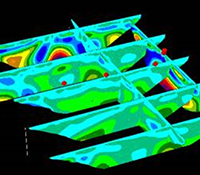 Inverted electrical tomography data over one of the research locations