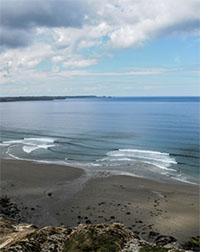 The coastal boundary zone is critical for transfers of sediments and particulate biogeochemical components. Oceanographic forcing across this region causes significant mobilisation and transport of seabed sediments, particularly during energetic winters such as the exemplary 2013/14. Increased storminess due to climate change will significantly impact the shoreface but the governing processes are poorly understood compared with the adjacent inner-shelf and foreshore.

The shoreface is mainly affected by shoaling waves and tidal currents, but recent work indicates that cross-shelf currents, and breaking waves during storms, may be additional important factors. These generate complex benthic boundary layer dynamics at the interface between shelf-sea oceanography and nearshore coastal-processes, facilitating sediment storage, large-scale cross/alongshore sediment transport, and its removal from nearshore sediment cells and beaches.

Work by the Coastal Dynamics and Erosion group is addressing this knowledge gap to enable better understanding and prediction of the coastal impact of large storms and sea-level rise – the availability of sediments and the development of coastal morphology are key factors in coastline protection and, increasingly, the construction and grid-connection of marine renewable energy infrastructure. [Nest frame image]

Rip currents are seaward-directed flows of water driven by breaking waves that originate close to the shoreline and extend seaward across the surf zone, and beyond. Thousands of people drown on beaches worldwide annually and hundreds of thousands more are rescued, mostly because of rip currents. In the UK, RNLI lifeguards report that rip currents are responsible for two-thirds of all water-based incidents that they respond to, and a similar percentage is reported from the USA and Australia. Annual rip current related fatalities exceed 100 in the USA and 20 in Australia.

Furthermore, rip current circulation provides the primary mechanism for flushing the surf zone and therefore affect the marine environment by controlling the mixing and dispersion of nutrients and pollutants from the surf zone to the inner-shelf.

Nearshore cell circulation is driven by incident wave energy dissipation through the generation of cross-shore and alongshore gradients in the radiation stress and the mean nearshore water level. At a qualitative level this theoretical underpinning is reasonably well understood, but in practice it remains problematic to predict exactly when, and under what morphodynamic conditions, rip currents are at their strongest and pose the largest threat to surf zone water users. Two recent research projects (DRIBS and TOPORIP) funded by NERC, RNLI and the Met Office examine the dynamics of rip currents and the implications for beach safety on open coast and engineered beaches, respectively.

Observational data is used to quantify wave energy dissipation by bed friction and wave breaking, and the dissipation rate is used to determine the wave friction factors. In turn, the obtained wave friction factors are correlated to the roughness of the shore platform surface related to the overall morphology and micro-topography as measured using a 3D terrestrial laser scanner.

The improved wave friction parameterisation is being implemented in the open-source XBeach numerical model, and the model is being used at a number of sites to evaluate the effect of changing sea level to the wave energy delivery to the cliff base to explore the potential effect of rising sea level on coastal cliff recession. 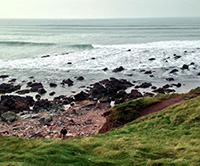 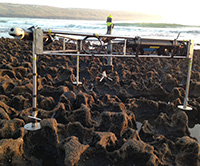 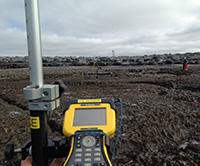 The majority of terrestrially derived suspended particulate matter (SPM) is transported to the open ocean by rivers; therefore, the river estuary transition zone (RETZ) represents a globally significant boundary separating the riverine and coastal regimes. The fate of SPM in the RETZ depends on its physical properties which are likely to be extremely variable. The RETZ is characterised by large temporal and spatial gradients in hydrodynamic properties. Therefore, quantifying SPM properties in relation to physical forcing is key to determining the transfer flux of SPM from the catchment to the coastal ocean. One of the aims of this research group is to determine the relationship between floc properties and the turbulence regime in the RETZ of tidally dominated estuaries over tidal, lunar and seasonal temporal scales. 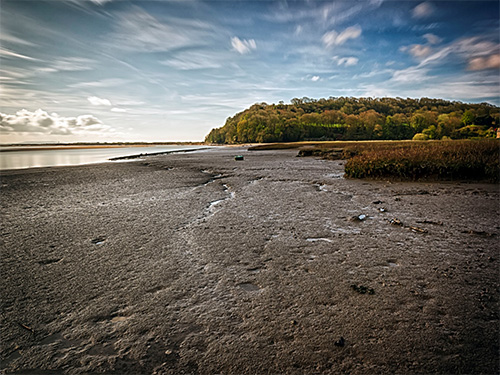 Flocs are fragile in nature and their properties fluctuate on short spatial and temporal
scales; therefore in situ optical instruments (LISST-100X, LISST-HOLO and transmissometer) are deployed in the RETZ to obtain volume concentrations, mass concentrations, shape, area and indicate biological components of SPM. Turbulence measurements are determined via acoustic methods; ADCP and ADVs are deployed near to the bed to estimate TKE dissipation rates relating to floc measurements. 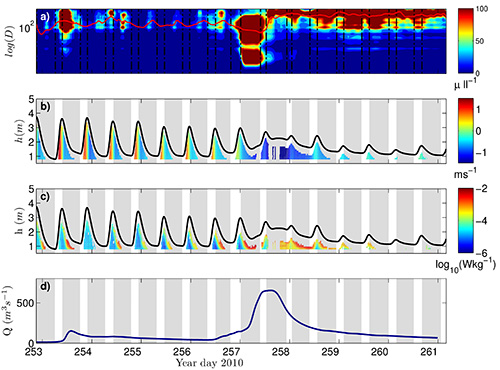 Diurnal and semi-diurnal signals in floc properties can be observed in the RETZ, including resuspension signals coinciding with peak flows and flocculation signals corresponding with low turbulence conditions. Turbulence dissipation as been found to scale with SPM properties on a tidal scale, however this relationship can be modified during periods of increased fluvial influence. Tidal and lunar variations of particle properties in the RETZ have been observed at all seasons sampled. SPM flux in the RETZ showed net seaward transport of coarse and fine particles. Furthermore, during the river flood event (Figure), the seaward flux of both coarse and fine particles was an order of magnitude greater than during normal river flow conditions for a macrotidal estuary. 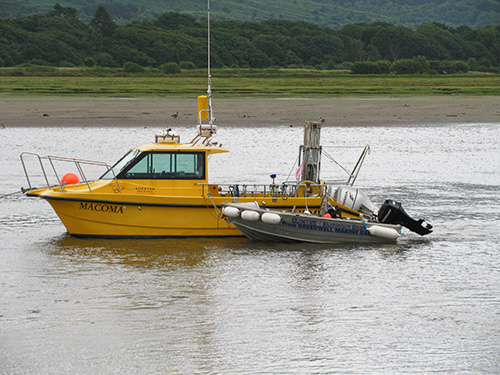 The RETZ is a complex environment to study however it is essential to gain understanding and quantify the relative importance of hydrodynamic and biological implications controlling SPM characteristics and thus the fate of the transfer of terrestrially derived organic matter to the coastal ocean. 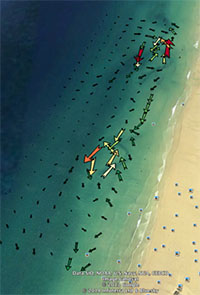 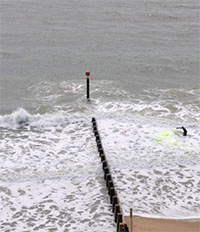