How will interacting with robots affect us? £1.5m ERC Grant

Robots and other types of artificial agents, such as avatars, are set to become increasingly commonplace in the near future - we’ll interact with them in workplaces, public spaces, and our own homes, as well as in education, health and care settings. Technologists have worked hard to develop useful machines to perform complex tasks in social settings, such as lifting patients from hospital beds, providing companionship for individuals with depression or dementia, or teaching children algebra.. But do we know whether long-term interactions with such robots might have any effect on us?

Dr Emily Cross, a social neuroscientist based at Bangor University’s leading School of Psychology, has been awarded a major European Research Council Starting Grant of nearing £1.5 M (€1.809,000) to investigate this under-studied area in a project entitled ‘Social Robots: Mechanisms and Consequences of Attributing Socialness to Artificial Agents’.

She explains: “A great deal of research has gone into developing robots to make them more socially engaging or acceptable. As this technology advances, we are going to see increasing use of artificial intelligence in human-centred settings in the coming decades.

“Some research suggests that we are happy to interact with robots for around 10 hours, after which we start to disengage. I’m interested in how our perception of robots changes across these 10 hours, and whether it’s possible to extend this ‘10 hour barrier’, as this will be important  if we will be interacting with robots more frequently or for long time periods.” 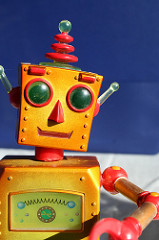 Robots no longer conform to our stereotypical images of them.: Robin Zebrowski https://www.flickr.com/photos/firepile/ https:// creativecommons.org/licenses/by/2.0/“We know that humans are very social animals, and also that the human brain is incredibly plastic and is shaped by all manner of experiences. One of my major questions concerns how brain activity changes when we interact with social robots over an extended period of time, and the extent to which we use neurocognitive mechanisms that have evolved to support social interaction with other people when we engage with robots. I am also interested in how age and cultural background influence the development of social relationships with robots”

Emily will be studying different age groups in her research (ranging from young toddlers to older adults), and also aims to explore the impact of cultural differences on human-robot interaction by involving people both in North Wales and Tokyo, Japan, where high-tech gadgets and social robots are already becoming commonplace.

The award, made to early career researchers, and lasting five years, will also enable Dr Cross to build her own research team within her Social Brain in Action Laboratory (www.soba-lab.com), as well as developing her fascinating area of research.

ERC Starting Grants are awarded to researchers who have a scientific track record in conducting excellent science and who show great promise.

"We need to keep our most talented researchers in Europe while attracting the new and diverse perspectives of top researchers from elsewhere in the world. These grants ensure many of the world's most exciting ideas are developed right here: giving researchers and scientists the freedom and security to pursue their careers and ambitions on our continent."

This is one of 48 grants awarded in UK across the physical sciences, life sciences and social sciences, and the only award granted to a UK-based scientist from the ‘Human Mind and Its Complexity’ research domain.