On Boxing Day 1909 the residents of Holyhead awoke to shocking news. The previous night a 35 year old woman, Gwen Ellen Jones, had been brutally murdered. One newspaper graphically reported that her head had been nearly severed.  Her killer, 49 year old William Murphy, gave himself up and was committed for trial at Beaumaris Assizes on 26 January 1910.

William Murphy’s name has gained notoriety as the last man to be hanged at Caernarfon Gaol.  But what about the woman he killed? New research revealed by Bangor University’s Colclough Centre for the History and Culture of the Book, focusses on written evidence to reveal the life of the victim of this violent crime. 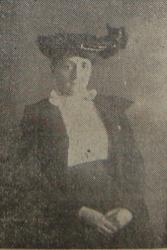 A contemporary newspaper image of Gwen Ellen Jones, published at the time of her murder.: With thanks to the Daily Post and Gwynedd Archives Service.Gwen Ellen Jones was variously described in newspapers as Murphy’s paramour, a prostitute, a beggar and a hawker. Hazel Robbins, an Associate member of the Centre, asks what was the truth about this woman’s life.

Hazel says, “Now, 110 years after her death, it is time that Gwen Ellen Jones is remembered as a person in her own right and not just as a footnote to William Murphy’s story.”

Following Hazel’s research, a HistoryPoints QR code is being placed near Cae Star, the area where Gwen lived in Bethesda with her father and children just before her death, to commemorate her life.  The History Points project delivers Welsh history to mobile phones on the spot via a downloadable free app. Gwen was born in Blaenau Ffestiniog in 1874, the daughter of a slate miner.

After her mother died, the family moved to Llanfairfechan where in 1898 Gwen married Morris Jones, a labourer in the stone quarry.  Her father (who was in poor health) and younger sister moved in with them. She also adopted two year old Gwladys Jones, who had been born in Llanrwst workhouse and abandoned by her mother.  Gwen was clearly at the centre of a family who depended on her.

Gwen took in washing to help make ends meet, and through this, met William Murphy.  Murphy, a powerfully built man, had been in the army and served in India and South Africa and more recently, in the local militia.  With his military background and overseas service, he might have appeared a bit of a swashbuckler to Gwen and they began an affair. Gwen’s son, born in 1903 was most likely Murphy’s child and she named him William John after her lover and her father.

Hazel explained: “Society at that time condemned such behaviour and when she left her husband to live with Murphy her fall from grace was complete.”

Gwen was left reliant on Murphy, a jealous man who had become violent towards her.  They took a room in a ‘common lodging house’ in Holyhead. As Murphy was no longer in the military full time, he obtained work as a labourer wherever he could and the couple were often forced to beg. In 1909 while he was working away, Gwen attempted to leave William Murphy and took up with Robert Jones in Holyhead. She may have resorted to prostitution to increase her meagre income and make her independent of Murphy. 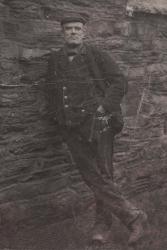 William Murphy: With thanks to Gwynedd Archives Service'When Murphy arrived in Holyhead in December and discovered Gwen living with Robert Jones he was consumed with jealousy.  He showed her a knife and a cord and warned ‘she would get one or the other’ if she did not go to South Wales with him.

On the fateful night of 25 December, outside the Bardsey Island Inn, he persuaded Gwen to go for a walk with him. This was the last time Gwen was seen alive.

Gwen was quietly laid to rest in an unmarked pauper’s grave Holyhead on 29 December. Her son and adopted daughter were taken into care and sent to different homes and we do not know if they ever saw each other again. With Gwen’s death in 1909 the precarious little family unit that had survived until then, fell apart.

Hazel reflects: “Gwen Ellen Jones was a person in her own right, she made mistakes, but she also showed resilience and kindness. She was important to her family as a mother, daughter and sister and that is how she should be remembered and not merely as a woman of ‘the hawker class’ who was murdered by William Murphy on 25 December 1909.”

More details about Gwen’s life and death can be found here: http://colclough.bangor.ac.uk/blog/the-christmas-day-murder-1909-remembering-gwen-ellen-jones-42600