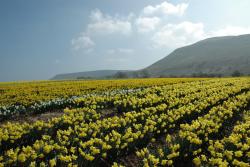 Daffodils growing at the University's Henfaes Research Centrehe national flower of Wales has found a new role this St David’s Day (Friday 1 March) – helping scientists to better understand the value of plant extracts as an alternative to antibiotics in animal feed.

Researchers from Bangor University and Scotland’s Rural College (SRUC) have teamed up to investigate the effects of daffodil extracts as natural antimicrobials on the digestive systems of cattle and sheep.

Plant extracts have the potential to improve growth performance and health, as well as decrease methane produced by enteric fermentation – a digestive process that sees carbohydrates broken down by micro-organisms.

However, the effects of feeding plant extracts to animals can be inconsistent. This has been attributed to differences in the composition of the extracts, even when prepared from the same source and using the same methodology.

The study, which has been published by Scientific Reports, found that very small differences made to the chemical structure of the bioactive compounds in the daffodil extract – haemanthamine – made a considerable difference to digestion in the rumen – the first part of the stomach of ruminants such as cattle and sheep.

The scientists concluded that if plant extracts are to replace traditional antibiotics in animal feeds, then a joint approach linking chemistry and biology will be required to describe the effects of novel plant extracts.

Dr Eva Ramos-Morales from SRUC, said: “It was very surprising to find that apparently similar compounds could have such different impacts on rumen digestion. This study highlights the need to standardise processes and obtain plant extracts with consistent chemical composition in order to maximise the positive effects in animals.”

Dr Paddy Murphy from Bangor University said: “The role of organic chemists in separating naturally occurring compounds from agricultural waste products is key to developing new environmentally sustainable materials.  In the future we hope to extract metabolites from daffodil by-products that will be of interest to the pharmaceutical industry.”