A Chair for Euros

Many congratulations to Euros Gwyn Jones, a third-year student at the Scho 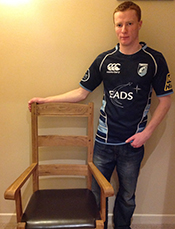 ol of Welsh, who won the Chair at the Eryri Young Farmers’ Eisteddfod earlier this month. Euros came first in a contest described as being of an ‘exceptionally high standard’, with 34 entrants, having written a story about a young boy’s reaction to the news of his father’s terminal illness. The prize-winning story was originally completed as part of a creative writing module at the School of Welsh.

The adjudicator, Ffion G. Williams, commended Euros’s ability to capture the reader’s imagination: he was, she said, ‘a master craftsman and an accomplished author’.

‘The prospect of standing up in the midst of a large crowd of Young Farmers on a Saturday evening was frightening,’ said Euros, ‘but winning the Chair at the Eryri Eisteddfod was a very valuable experience.’