Bangor Law School has happily welcomed Damian Etone of Cameroon as its first ever Chevening student.

Damian graduated from the University of Buea, Cameroon, with an LLB in 2011. Cameroon is one of the few countries in the world to have a mix of common and civil law. He most enjoyed studying International Law (Public and Private) and Human Rights, and during his undergraduate studies he was involved in student politics, having been the President of the Law Society. Damian wants to become a Barrister specialising in Human Rights issues because “I grew up in the midst of human rights violations, and I am determined to equip myself to help my country”.

Established by the UK government, the highly competitive Chevening Scholarship is awarded to international students 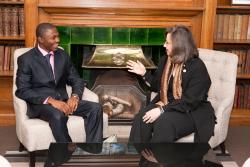 Chevening Scholars past and present: Professor Linton welcomes Damian to Bangor Law Schoolwho demonstrate potential to become future leaders and decision-makers. This year, 300 applicants from Cameroon were whittled down to a shortlist of ten. Damian was one of only three successful students from Cameroon to be awarded the prize, with the other recipients studying at the School of Tropical Medicine in Liverpool, and Development Studies in Manchester. “The Foreign Office is organising a welcome for all of us next month in Warwick, and I am very excited about meeting the other scholars from around the world”, says Damian.

Damian has enjoyed the warm welcome he has had from the University and the people of Bangor, and he is impressed by the natural beauty of the area and historic buildings on campus. Now three weeks into his courses on Public International Law and the International Law of Human Rights, he is enjoying the challenging content of his programme, and the modules on offer. “The courses open me up to so many new things, and are challenging because I get to have an insight into the complexity of the subjects. They require much study to achieve a great understanding. It is also challenging because I get to read a lot of texts and journals, but I also get to use modern technology as the lecturer uses the latest technology and gives us documentaries and lectures to watch online.” The environment and mode of classroom teaching is something that Damian really enjoys, and he is greatly inspired by the expertise and abilities of Bangor staff. He is also impressed with the Library and other support services offered by the University.

Since his arrival in Bangor, Damian has been fortunate enough to engage in two unique events. The first was an Employment Law course; the second, the special service of thanksgiving at Bangor Cathedral for the start of the UK Legal Year on Sunday, 14th October 2012. “The Employment Law course, organised for us by the Bangor Centre for International Law and the Equality and Human Rights Commission, opened my eyes to employment discrimination and inequality in the employment field, and the various forms of discrimination which before then I had no idea of”, says Damian, who along with 8 of his fellow students, will be attending the course once a week over a 6 month period. Of the thanksgiving service, Damian says: “the service at the Cathedral was just amazing. I got to see all the top legal professionals in the UK in their formal dress walking through Bangor town, and then seated in the very historic church with me. The Lord Chief Justice of the UK was there, along with many other judges and leaders in the Law. I also met the Bishop of Bangor and we had a small chat!”.

“We are only in our second year of the International Law programmes, and I am greatly encouraged to be welcoming the first student ever to attend the Law School through the Chevening Scholarship scheme”, comments Professor Linton, who herself studied Law at Bristol University thanks to a scholarship from the British government in the 1980s. “I am a member of the Malaysian Chevening Alumni Association, and over the years have helped prepare many Asian students for the award.  This is a really fantastic programme that makes a difference to countries and lives. I have particularly powerful memories of the time I was asked by the British High Commissioner in Dili, East Timor, to brief Chevening Scholars about my experience of studying in the UK. Things were still devastated and unstable there after the violence of 1999, but the Chevening Scholarship offered promising young Timorese hope and opportunities to make their dreams come true. All of the people I know who have benefited from the Chevening Scholarship have gone on to do important and wonderful work, and I have full confidence that Damian will do so too. ”

For further information about the Chevening Scholarship scheme, visit the website.