Debating Iraq at the Law School

The Bangor Centre for International Law (BCIL) regularly organises internationally-oriented events designed to enrich the intellectual environment at the Law School, and contribute towards providing a broad and outward looking education. Our many international students are often actively engaged with BCIL’s activities; some events, such as a roundtable discussion between Iraqi students and the United Nations Association in October 2013, have been developed to promote cross-cultural dialogue and understanding.

BCIL has, in recent weeks, been delighted to host two fascinating presentations on Iraq by PhD students. These presentations have generated important and lively discussions ranging from Iraq’s petroleum resources to self-determination to the Constitution to the creation of a new state from Iraq’s Kurdish Region.

In December 2013, Soran Qader gave the first presentation, on the controversial International Law principle of uti possidetis juris, described by the International Court of

Soran Qader delivering his presentation on Uti PossidetisJustice as being ‘among the most important legal principles’ regarding territorial title and boundary delimitation at the moment of decolonization. Soran drew on the yet more disputed use of this principle for boundary delimitations outside of the colonial context, as was done by the Badinter Commission in relation to the former Yugoslavia. He considered whether the principle could be used in resolving ongoing internal boundary disputes between the area of northern Iraq known as the Kurdistan Region and the rest of the country, and what the international boundary would be like if a new state were to emerge from that area.

Soran’s discussion, and his conclusion that Iraq and Kurdistan are headed for a divorce, sparked much discussion. Saddam Hussein and the history of the region going much further back were very much present as the dialogue developed. Iraq’s contested internal boundaries were also much discussed, as was the issue of population transfers that had taken place in the previous regime. One questioner asked what it was that made a group of people seek a separate destiny from others with whom they had lived for a long time.

Flowing on from issues raised in this meeting, two other Law School PhD students, Sinan Al-Bidery and Nidham G T Al Abasey, gave a presentation on ‘Constitutional and 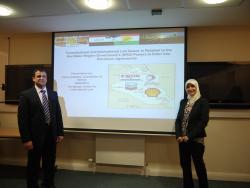 Sinan Ali (right) and Nidham Al Abasey (left)International Law Issues in relation to the Kurdistan Region Government’s powers to enter into petroleum agreements’. The talk, on 6 February 2014, considered the present legal dispute over whether the Kurdistan Region Government (KRG) has the power to enter into treaties with states, or agreements with foreign petroleum companies, for the sale or exploitation of petroleum located in the Kurdish region. The speakers presented both viewpoints – the Iraqi federal government argues that under 2005 Constitution, the KRG does not have authority to represent Iraq in such matters, while the KRG argues that it has full powers to do so, and to do so without Baghdad’s permission – but ultimately opted for the position of the federal government.

A lively and rigorous discussion then followed, with many different interpretations of the critical provisions in the Constitution being offered. The members of the audience raised the controversial making of the Iraqi constitution, the problematic nature of the critical provisions concerning petroleum, exclusive and shared powers, and the future of Iraq. Questions were asked about equality amongst the peoples of Iraq who are supposed to own her natural resources collectively, and the distribution of Iraq’s petroleum revenues. Several solutions to the challenge of the KRG’s entering into petroleum agreements were offered, including referring the matter to the Iraqi Supreme Court, adopting the much awaited oil and gas law, and drawing from the experiences of other resource-rich countries in a federal structure.

Professor Suzannah Linton, the Law School’s Chair of International Law and the Director of the BCIL, observed that debate and dialogue on cutting edge issues are an 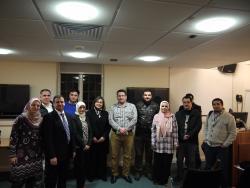 Some of the Iraqi students with Professor Linton after Sinan and Nidham's presentationimportant aspect of academic life, and students should seize such opportunities when they are available, and use their initiative to create opportunities where none exist. She noted that the United Kingdom has traditionally provided a safe environment for university students from all over the world to speak freely, and engage in genuine dialogue that challenges yet enriches, provokes but opens minds and hearts to new possibilities, and ultimately respects the rights of others to think differently. “That safe space is vital when people engage in discussion involving matters so close to the heart. It has been a privilege to provide such occasions, and to share in the genuine dialogue that has taken place here among our students”, she added.