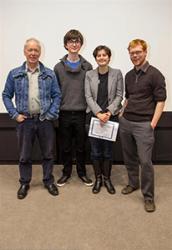 "I can’t believe it," said Lauren. "I was so nervous backstage. I was certain I wouldn’t win."

On paper, it could be argued that Lauren had every right to think she didn’t stand a chance. This was only her fourth attempt at stand-up comedy.

"It was so tense backstage," said the twenty two year old. "But when I took to the stage the crowd was so supportive."

It was that support that helped Lauren to overcome her nerves as she went on to deliver a side-splitting performance of character and straight stand-up comedy.

"When I came off stage I was elated," said Lauren. "It was a great feeling being able to make that many people laugh."

The prize for winning the competition will now see Lauren perform the warm-up spot for professional comedian and TV star, Sean Walsh at a forthcoming Pontio gig at Bangor University.

Lauren has been involved in comedy for around three years having joined the University comedy society in her first year of study. Since then she has performed various forms of comedy ranging from sketch, character and improv comedy, even performing alongside comedian, Phil Jupitus, as part of the Giddy Goat Comedy Festival at Venue Cymru.

When asked what advice she would give to anyone who wants to give stand-up a go Lauren said, "They should find like-minded people who will provide a support structure."

Lauren also said, "Anyone wanting to do comedy should start making observations about people, places and anything else that can be used as material for a stand-up set."

It was Lauren’s own observations about her family that gave her the edge at the competition. I asked her if her family knew they were the subject of her jokes.

"They do," said Lauren. "But there was nothing malicious in what I said!"

Patrick Pritchard, President of the Bangor University Comedy Society said: "Lauren has consistently been one of Bangor Comedy's top performers all year. I'm delighted that she has been given the recognition she deserves!"

He also added that:

"The Stand Up Competition has quickly become one of Bangor Comedy's Biggest Shows. It inspires people to take the chance to try something new and is also a fantastic night out for our audience! All of our performers, whether the comedic stalwarts of Bangor Comedy's roster or people attempting stand up for the first time, maintained a superbly high level of performance throughout the night and I could not be more delighted at the range and depth of comedy that has been produced."

Lauren will be performing alongside TV comedian, Sean Walsh at J.P. Hall, Bangor University on May 6th.

For more information about Bangor Comedy head to: