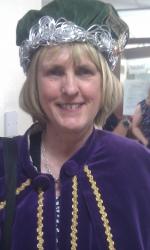 Many congratulations to Rhian Owen, who is following a Masters course in Creative Writing at the School of Welsh, for winning the Crown at the Anglesey Eisteddfod recently. According to adjudicator, John Hywyn, Rhian's work fully deserved to win first prize in a competition that was of a high standard. The Crown itself contains copper from Parys Mountain, near Amlwch.This year, the competitors were asked to produce a series of poems, of not more than 150 lines in total, on the subject 'Cylchoedd / Circles'. Rhian chose to submit four poems that were inspired during her MA course.'Winning the Crown has given me the confidence to keep on writing,' said Rhian. 'But there was also the unexpected pleasure of meeting people on the street at Llangefni, near where I live, who were delighted that I had won and enquiring about the poems.'Dr Angharad Price, who coordinates the weekly postgraduate Creative Writing seminars at the School, said: 'We are so pleased that Rhian has had the recognition she deserves as a writer. She forms part of a very lively community of creative writers at the School of Welsh - novelists, poets and dramatists - with whom it is a privilege to work.'