Berlin was the exciting destination for Social Sciences students during the first week of the Easter holidays in April. Thirty students and three staff members set off for the German capital for the first joint School and Social Sciences Society trip abroad in recent years. The idea for the trip was initially linked to the School’s 50th anniversary celebrations last year. Berlin was the students’ first choice destination because of its historical, cultural and social attractions.

Some of the students and staff outside the Brandenburg Gate

The party stayed for four nights in the A & O Friedrichshain Hostel, one of the largest hostels in Berlin, situated in the colourful and trendy eastern district of the city with many nearby restaurants and bars frequented by local students. Conveniently located by the metro system with just a few stops to Alexanderplatz, the hostel was an ideal base for exploring the city.

The first day was a free day when students could orientate themselves to the city. While some students embarked on a visit to Berlin’s famous zoo others made their way into the city centre passing the East Side Gallery. The East Side Gallery is a 1,316 metres long section of the Berlin wall located by the river Spree and is today an international memorial for freedom. Particularly impressive was the art work covering the wall with radical and anti-war messages. The East Side Gallery also has a selection of street artists ranging from rather zany to what sounded like accomplished musicians. 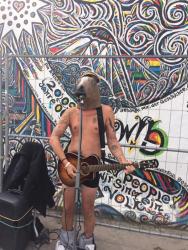 A street singer in Berlin

The second day started with a guided tour of the Holocaust Memorial which is located close to the Brandenburg Gate in central Berlin. The memorial was designed by architect Peter Eiseman and opened in 2005. Students learnt during the guided tour that Eiseman has allowed space for the visitor to interprete the memorial in their own way. After walking through the memorial, our guide facilitated a discussion about how the students interepreted the experience. For some the undulating field of concrete slabs represented tomb stones and for others, a vast sea to represent the suffering of the Jews murdered under the Nazi Terror 1933-45.

In the evening we joined a guided tour of the German Bundestag (parliament) building, the Reichstag. The current day Reichstag was transformed by architect Sir Norman Foster and has been the meeting place of the German Bundestag since reunification in 1990. The tour started by showing the bullet holes in the walls caused by Russian troops as they entered Berlin in 1945. The tour proceeded along the corridor where the German Chancellor, Angela Merkel’s office is located and then onto the debating chamber. It concluded with a visit to the dome with amazing 360 degree views of Berlin at night.

The third day started with a metro ride to Alexanderplatz for a morning lift ascent of the Berlin TV Tower. The TV Tower is Berlin’s tallest structure at 368 metres. The viewing platform is 203 metres high and with a drink at the bar it was possible to enjoy panoramic views of Berlin on a sunny day.

In the afternoon we visited the Jewish Museum designed in the shape of a deconstructed Star of David by architect Daniel Libeskind. The museum chronicles Jewish life in Germany from early history to the present day. The students divided into two guided tours, one on the history of Jews during the Weimar Republic and the other on the Nazi Terror. After the tours we were able to walk through the museum at our leisure and contemplate the poignancy and horror of the experience of Jewish people during the darkest times in German history.

Overall, the Berlin trip was regarded as a great success by all who visited the city. In their evaluative report on the trip for the Social Sciences Society, this is what three of the Society’s members, Sian Robinson, Elle Rogerson and Ellie Rose had to say:

"Whilst Berlin was a trip to de-stress from assignments and exams, it was also extremely educating and thought-provoking. Berlin as a city was beautiful and artistic and the trip itself was a brilliant opportunity to get involved with the Social Sciences Society and get to know other people studying a similar course. Many of us are definitely experiencing Berlin-blues; the memories we made and the activities we experienced could never be replicated".