The sun shines on SENRGy graduates 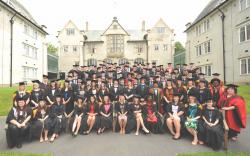 Some sunny skies greeted this year’s group of SENRGy graduates on Wednesday 18th July 2012 as they attended their degree ceremony in Pritchard Jones Hall. Students were introduced by Dr Christine Cahalan (SENRGy’s Head of School) and had their degrees confirmed by Bangor University Vice Chancellor Prof. John Hughes and the University President the Rt. Hon. Lord Elis-Thomas AM. In total over 100 SENRGy students graduated with both undergraduate and postgraduate degrees this year.

Following the ceremony, and resplendent in gowns, capes and mortar boards, our students posed for a group photo on the lawn in front of the Management Centre. Students and their guests joined SENRGy staff for a reception in John Phillips Hall and were able to take advantage of some well-earned refreshments.

The reception also allowed several prize-winners to be presented with awards achieved during their studies:

If you would like to receive copies of these photos, please email senrgy@bangor.ac.uk