Many congratulations to three postgraduate students at the School of Welsh for their recent success in creative writing.

The main winners at the Dyffryn Ogwen Eisteddfod were also postgraduate students at the School of Welsh. Cefin Roberts, who is currently completing a PhD in Creative 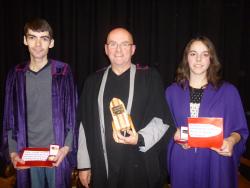 Gareth and Cefin after the Award Ceremony at the Dyffryn Ogwen Eisteddfod Writing, won the Chair for a long poem in the strict metres entitled ‘Turning Point’, whilst Gareth Evans-Jones won the Prose Medal for a ‘telegrammatic’ short story written as part of his MA creative writing portfolio. Both were praised by the judge, Llion Jones, for the high standard of their work. Gareth has also won major literary prizes at other eisteddfodau.

‘Competing in local eisteddfodau is very important to me,’ he said. ‘It’s an incentive to write new pieces and a chance to submit work under a pseudonym and to get a second opinion on one’s compositions.’