Glossary - A dictionary of immigration-related words

The Home Office immigration policy is full of jargon and terminology.

These are explained below, for a quick printable version click here.

The UKVI requires that each course you do must be at a higher academic level than the previous course you completed in the UK;  or, the new course must be related to and complement your previous course at the same level. Exceptions apply, for example if you need to re-sit, or if you are transferring to a different institution to continue on an existing course. In the case of transferring to another institution, you will need to make your new visa application from outside the UK. You will also need to apply from outside the UK if you need longer to complete the same course, e.g. you suspended your studies for medical reasons or have had an extension finish your Master's dissertation. PHD students who were given an extension can currently apply to extend their visas from inside the UK (*information correct on 1 August 2016).

This process has replaced appeals. If your Tier 4 application is refused, and you think that the UKVI have made a mistake, you may have a legal right to ask UKVI's to review their decision within 14 days of receiving the notice/visa. You will be told in your application refusal letter if you can ask for the decision on your visa application to be reviewed. This is known as an 'administrative review'.

This the name given to the ID card visa that you are given after you have successfully applied to extend your UK leave to remain.  See picture.

Someone who depends on you financially, such as a husband, wife, partner, or child.

This is permission to enter the UK.  It is the name of the visa that you are given at the start of any period of time in the UK.  It is usually a yellow sticker in your passport. See picture. 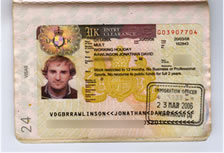 Some time limits were introduced on 6 April 2012 for degree level study.  Any new Tier 4 application must lead to you spending no more than five years on courses at undergraduate and Masters degree level.  All time you have had leave under Tier 4 (or as a pre-Tier 4 student) counts towards the 5 years, except for the short extra time you are given before the course (maximum one month) and after a course (maximum four months).

There are some exceptions to the 5-year cap:

If you have previously been granted leave to study one of these exempt courses, and your current application is for a different course then the time you were previously granted will be counted towards the time limit. This is because such a course is only excluded from the time limit while you are applying for leave to study it. The UKVI will not grant further leave to someone whose current Tier 4 application means they will exceed these limits, unless there are "compelling and compassionate circumstances", such as injury or disability.

The UKVI name for their "immigration system for managing applications by people who wish to come to the United Kingdom to work, train or study".

This is the institution that has offered you a place.  For most students reading this page, Bangor University!

(Our Sponsor Licence Number can be found on your CAS letter).

UKVI (formerly known as the UKBA)

The UK Visa and Immigration Service is the section of the Home Office that is responsible for visas and immigration.

The Home Office is the lead UK government department for immigration and passports, drugs policy, crime, counter-terrorism, police and equality.

UKVIS is not to be confused with the UK Border Force, who are responsible for securing the UK's borders.

The UK Council for International Student Affairs is an independent organisation which promotes and protects the needs of international students in the UK.  They are very useful organisation, and if you have not looked at the UKCISA website, you should!  They also have a student advice line and an online forum for students to ask questions about any aspect of living in the UK.

The UKVI provide a more detailed Glossary of Immigration Terms