This article by  Raluca Radulescu, Professor of Medieval Literature and English Literature, is republished from The Conversation under a Creative Commons license. Read the original article.

Dragons have inspired awe and wonder since the beginning of human imagination. Most recently, these fire-spitting flying creatures – in modern western culture at least – have come alive in Game of Thrones and its new spin off, House of Dragons.

These winged beasts are particularly important in the new series. Set 200 years before Game of Thrones, the series follows the Targaryen family who rules Westeros with the help of their dragons.

In the medieval west, dragons feature both in literature and in political history and prophecy. They reached their heyday in Arthurian stories, most notably in Merlin’s legendary prophecies of two dragons fighting for the sovereignty of two warring peoples. This story was later used and reused for centuries for political gain by real historical people.

The beasts of Westeros, the fictional land in which these series are set, owe a debt to these tales. So, for those who want to stand out from the crowd in online debates about the new series, here is an introduction to the dragons of Westeros that takes in Arthurian legend, a handful of battles and wars, the Tudors and the story of a contested heir.

The dragon’s roots in medieval lore go back to their image as menacing animals, such as the dragon at the end of the Germanic story of Beowulf. In this epic poem, Beowulf, a Scandinavian hero defeats Grendel, an outcast creature of gigantic stature in order to defend the Geats. After years of peace, Beowulf dies in combat against a new enemy, a dragon that holds power and a hoard of precious treasures – possibly in an act that symbolises the faults of a bad king in early culture.

Early Christian authors gave dragons human characteristics such as greed and in literature, dragons signalled the sin of avarice – they were creatures to fear and defeat. In later medieval Europe, however, red and white dragons featured in the pre-history of the legendary King Arthur of the Pendragon dynasty.

According to Geoffrey of Monmouth’s Historia Regum Britanniae (History of the Kings of Britain), first written in the 12th century, Arthur’s father, Uther Pendragon, gets his surname from witnessing a comet in the sky (the “pen” in his name meaning “head”) that resembles a fire-spitting dragon.

Prior to Uther’s reign, it is Vortigern, a Celtic leader (said to have invited the Saxons into Britain) who finds that his building of a tower at Dynas Emrys in North Wales is prevented by the underground struggle between a white and red dragon. The red dragon symbolises the Welsh and the white the Saxons. This Arthurian prophecy of these battling beasts was used to tell of a time when a leader would come to liberate the Welsh. This prophecy endured for centuries.

By the time Arthur was written into medieval history books, however, his Welsh ancestry had all but been forgotten, and he had been assimilated into English culture. This erasure led generations of English kings to claim descent from Arthur, if tenuously. This was particularly so during the Wars of the Roses (1455-87) when the white rose and red rose, representing the houses of York and Lancaster, clashed in a dynastic war that decimated the aristocracy. When it came to an end, with Henry Tudor bringing together in his descent the two dynasties and the Welsh line, the fighting white and red dragon could be said to have gone to rest.

Shakespeare’s dramatic rendering of the infamous Machiavellian-style politics during the Wars of the Roses in his series of history plays gave Game of Thrones’s creator, George R.R. Martin, a powerful source of inspiration for his books. Dynastic wars dominate Game of Thrones but the presence of dragons and their political significance comes to the fore in House of Dragons. 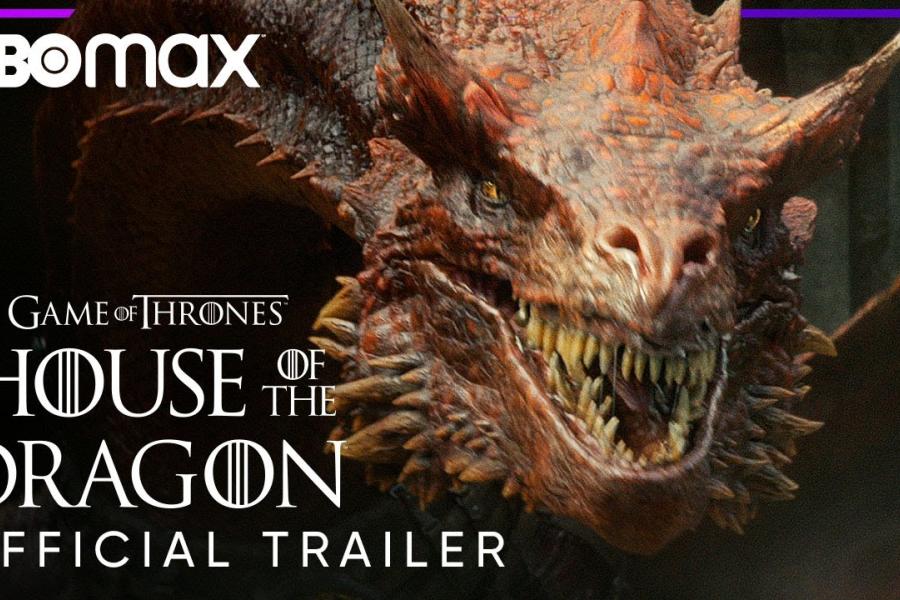 In the second episode of House of Dragons, king Viseryis reveals to his heir, princess Rhaenyra, that the Targaryen dynasty has only really held its position thanks to controlling the power dragons yield. The political power struggle that unravels is reminiscent of the period of English history known as The Anarchy (c. 1138-53), when the only male heir of King Henry I of England died and Matilda, the king’s daughter, was designated heir – the first female in England.

Stephen of Blois, the king’s nephew, contested Matilda’s claim and bitter struggles ensued. It can easily be seen that a period like this brought much anxiety and concern about the future. At this time, Geoffrey’s works, the Historia and also his Prophecies of Merlin, steeped in Arthurian legend as they were, were used to build hope in prophecy as a tool to read the future of politics while the prospect of peace was nowhere in sight.

The Anarchy in England preceded the Wars of the Roses by almost as many years as the action depicted in House of Dragons precedes the events of Game of Thrones. It is easy to see how these periods and their myths inspired Martin. In both of these historical periods of turmoil, and in Martin’s series of novels, human control over prophecy is as difficult as their control over dragons.

Prophetic texts were used to infuse politics with hope for a charismatic leader and dragons could only enhance the enticing aura of mystery around such a future. It is here that Martin’s use of dragons moves to a more modern taste for fantastical power.

Interestingly, dragons of yore had to be dominated or defeated; their occasional use in heraldry and art was meant to impress and inspire awe. The dragons of Westeros, however, are most powerful when lead, in both TV series, by young female characters who nurture rather than destroy or dominate these creatures. In the prequel, we are just getting a look at this relationship. We should expect a lot more legend and violence, but also more inspiring female-dominated politics and more dragon action.