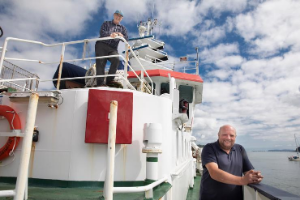 The revolutionary MTB – motor torpedo boat – 539 was designed and built on the Menai Straits 75 years ago to rocket along at almost 50mph driven by three massive 1500 horse-power Packard V-12 petrol engines and was armed to the teeth.

It was 75 feet long and boasted twin torpedo tubes on each side and an array of heavy machine guns so it certainly packed a punch and it was the UK’s first all-aluminium Royal Navy boat.

It even had a brief role in a film, playing the part of a German E-boat in Appointment with Venus, starring David Niven and Glynis Johns.

But that light and wafer-thin aluminium, a product of the wartime aeroplane building industry, also made it vulnerable and when it was under tow and caught in a gale in the Irish Sea one of those giant engines shook loose and smashed a fatal hole in the hull. 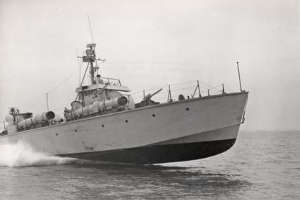 The MTB 539The tow rope parted and the boat sank quickly but thankfully no-one was aboard or lost and MTB 539 now lies peacefully off Point Lynas on the island’s North East coast in 120 feet of water.

The wreck has been surveyed using multibeam sonar by a team from Bangor University’s School of Ocean Sciences who are mapping the seabed off the coast of Wales as part of their ongoing research and will feature in the innovative O Dan y Dŵr – Hidden Seascapes of Wales project which features a range of underwater sites around the Welsh coast.

MTB 539, one of many historic wrecks in Anglesey waters, was designed and built by air and marine engineering specialists Saunders Roe at their Fryars Bay yard just outside Beaumaris and a young marine engineer, Victor Mills, worked on it shortly after joining the firm in 1945.

His son, local maritime historian Dave Mills, who followed his father into work with Saunders Roe, has pieced together the chequered history of the unlucky boat which sank in 1952.

He said: “It was an experimental craft and when my dad got a job there he was quite surprised to be working on it almost immediately.

“It was built from aluminium which Saunders Roe had experience of working with on flying boats and so was very light and it was powered by three huge 1500 horsepower Packard engines.

“It was launched in about 1948 and went down to Portsmouth for trials but had developed quite a few problems and was being towed back to Anglesey by an Admiralty tug.

“They had rounded Point Lynas off the north east coast of Anglesey when they were caught in a storm at night and the engine shook off its mountings and punched a hole through the thin aluminium hull and the boat immediately sank, thankfully without any loss of life.”

Dave added that MTB 539 was sitting on the sandy sea floor and had little damage: “The action of the tidal flow has polished the hull to a shiny finish,” he said.

Dr Michael Roberts, of the School of Ocean Sciences, has been heavily involved in the SEACAMS2 project and helped set up the new O Dan y Dŵr initiative which features a unique collection of sonar-based images and information on submerged sites around the coast of Wales.

Much of the data and resultant imagery has been gathered from the university’s survey ship Prince Madog, based at Menai Bridge, which spends approximately forty days a year on expeditions around the Welsh coastline to map the seabed.

Dr Roberts said: “We use a multibeam system which emits over five hundred near-simultaneous sonar beams which bounce back off the seabed to provide an image of what’s down there. 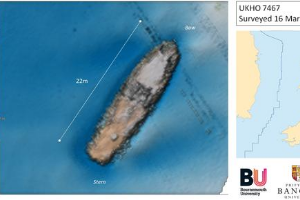 The MTB in her final resting place nine miles North East of Point Lynas“There is actually more of our country under the water than above and our ambition is to map this hidden part of Wales in as much detail as possible.

“We do know where the vast majority of shipwrecks in our waters are, with over 300 lying off the Welsh coast between Pembrokeshire and the Great Orme, however the vast majority are either unknown or may have been mis-identified.

“The MTB happens to be a wreck which has previously been identified and due to its depth has been visited by divers.

“Every single wreck out there is unique and each one has its own fascinating story, but even the steel-hulled wrecks that have been lost over the last 100 years, particularly those lost through actions in both world wars, need to be surveyed before they degrade through marine processes and become indistinguishable.

“Apart from the important link to our maritime heritage, these wrecks still hold cargo that may be worth salvaging and many contain varying amounts of munitions and fuel - even the ships are made of pre-nuclear era steel that may become valuable in the manufacture of radiation-sensitive medical instruments.

“All of this though is meaningless if we don’t identify these wrecks in the first instance and so by surveying each wreck site and working closely with academics such as Dr Innes McCartney at Bournemouth University this is something we hope to achieve in the near-future.”

The School of Ocean Sciences began surveying the seabed in 2012 and in that time have mapped hundreds of square miles off the Welsh coast and surveyed hundreds of wreck sites.

Dr Roberts added: “There’s also huge public interest in the wrecks off our coasts and that’s why we’re posting new ones up on our website as often as possible.

“Based on feedback we’ve received from dozens of public lectures and hosting exhibitions on our research it’s clear there’s significant appetite for this type of information to be shared more widely and our new online initiative supports this.

“We hope it will also stimulate greater awareness and interest in Wales’ hidden underwater environment, highlight the research undertaken at Bangor University and help promote the opportunities available for students looking to study at the School of Ocean Sciences.”

Head of the School Professor John Turner said: "This exciting initiative not only gives a taste of the exciting research which is going on here at Bangor University, but allows a previously unavailable glimpse of what lies below the waves around the coast of Wales."

To check out the hidden Wales of its coastal waters go to http://www.seacams.ac.uk/seacams2/