It was a great pleasure to hear that Megan Elias, a second year student at the School of Welsh, Bangor University, had 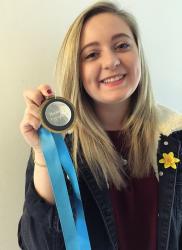 reached the final round of the Welsh Learners' Medal at the Urdd National Eisteddfod this year:

'The competition’s aim is to award an individual who is committed to learning Welsh and is proud of his/her Welsh identity. The Learners' Medal will be awarded to an individual who shows how he/she uses the language from day to day at school and socially.'

This year, the competition was rearranged slightly, with Welsh learners from Year 10 and under 25 years old eligible to compete. Each candidate was required to complete an application form denoting their reasons for learning Welsh and the language's effect on their lives and the use they make of the language. Then, from among the applications, the successful candidates were chosen to take part in a semi-final round at Glan-llyn, where a series of various tasks were assigned to them by the judges, Nia Parry and Enfys Thomas, in order to test the candidates' ability to communicate through the medium of Welsh:

'There were 11 of us there in the company of the judges and a camera crew and Glan-llyn staff. We took part in a variety of group activities all day, such as climbing, building a raft, orienteering and a writing task in order for us to enjoy but also in order to assess how we could communicate through the medium of Welsh. We also had to have an interview with the judges and S4C presenters for them to get to know us better and learn more about what the Welsh language means to us.'

Three competitors, including Megan, were chosen from the semi-final to compete in the final which will be held on the Tuesday during the Urdd National Eisteddfod in Flintshire, before it is announced who wins the Learners' Medal:

'I decided to compete in the Learners' Medal at the Urdd National Eisteddfod this year because the Urdd means so much to me and a lot of people had told me that I should go for it. Reaching this far means so much to me because I will be competing on the Urdd field where I was inspired in 2014 at Bala to learn Welsh and study it at Bangor University. I wouldn't be where I am today if I hadn't visited the Urdd Eisteddfod that day, and as a result, the Urdd has changed my life completely and I am extremely proud to have reached the final of this competition. It's a way for me to thank and show my appreciation to everyone who has supported me over the last two years when I was learning the language, including my Welsh teachers at Ysgol Eirias, my lecturers at the School of Welsh, Bangor University, the Urdd's staff, my friends at Neuadd JMJ and everyone at home!'

During her time at Bangor, Megan has embraced the Welsh language and culture and enjoys listening to Welsh music and attending eisteddfodau and earlier this year she won the Learners' Medal at the Intercollegiate Eisteddfod.

Dr Manon Wyn Williams, a lecturer with the Coleg Cymraeg Cenedlaethol and one of Megan's teachers at Bangor said, 'we are all, staff and students at the School of Welsh, extremely proud of Megan's success. She is a conscientious and likeable student who is always ready to lend a hand and she is very supportive of other students who are learning Welsh. Her passion for the Welsh language and culture is an integral part of her. Best wishes to you, Megan, and congratulations on reaching the final!'