Welsh inventor of the breathalyser remembered by University 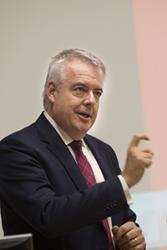 Wales’s First Minister, Carwyn Jones, visited Bangor University recently, to commemorate the life and work of Dr Thomas Parry Jones OBE, who was one of Wales’s internationally-acclaimed scientists and entrepreneurs. Carwyn Jones delivered "A Breathtaking Legacy of an Inventor, Entrepreneur & Philanthropist", the title of the ‘Dr Tom Parry Jones Memorial Lecture’ to a large audience, in honour of this Anglesey man who invented the electronic breathalyser, and in so doing saved countless lives.

Dr Thomas Parry Jones, who died in January 2013 aged 78, grew up on an Anglesey farm, graduated in Chemistry from Bangor, and became a distinguished academic-turned- businessman. In the late 1960s, from his base as a Lecturer in the University of Wales Institute of Science & Technology in Cardiff, he developed the ‘Alcolyser’, and a few years later the hand-held ‘Alcolmeter’, which were manufactured at the company he set up in Cardiff, Lion Laboratories Ltd. The electronic breathalyser sold in large numbers throughout the world, and won a series of awards. It transformed the way that police forces were able to enforce drink-drive legislation.

The First Minister said: “I am very pleased to be able to be part of the inaugural Tom Parry Jones Memorial Lecture and, in doing so, to further honour such an outstanding role model for researchers, entrepreneurs and philanthropists across Wales and far beyond.” 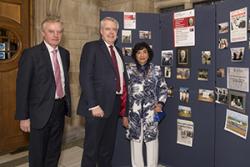 Professor John G Hughes, University Vice-Chancellor, with First Minister Carwyn Jones and Mrs Raj Parry Jones, widow of Dr Tom Parry Jones OBE.Dr David Roberts, the University’s Registrar, said: “Dr Tom Parry Jones recorded many great achievements in his career, and won numerous awards for his work. Yet one of his main aims was to inspire and support others - new generations of students - to become involved in science and entrepreneurship, and he generously established a Tom Parry Jones Endowment Fund in Bangor University for this purpose a number of years ago. This has firmly established the popular Bangor Science Festival. We value greatly this opportunity to express our appreciation and to pay tribute to Tom’s memory.”