A prestigious European Commission RegioStars Award 2014 has been won by the BEACON Biorefining Centre of Excellence, an innovative Welsh research partnership dedicated to developing industrial products from plants to reduce reliance on fossil-based resources such as coal and gas.

BEACON is a Welsh Government EU funded collaboration between Aberystwyth, Bangor and Swansea universities. The BEACON team received their award at a glittering awards ceremony in Brussels on March 31st.

Researchers at BEACON work with industry, including small and medium sized enterprises, to develop renewable materials, fuels and chemicals as well as modified and new environmental and economically sustainable processes.

Led by Aberystwyth University’s Institute of Biological, Environmental and Rural Sciences (IBERS), BEACON was one of 4 projects to be shortlisted in the “Sustainable growth: Green growth and jobs through Bio-economy” category.

The other three were Ecoponto em casa from Portugal, ORGANEXT from Belgium, Germany and the Netherlands and ARBOR which has partners from the UK, Ireland, Germany, Luxembourg, Netherlands and Belgium. 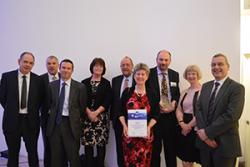 The Beacon team receiving the Award with Minister Jane Hutt at the event in Brussels.On receiving the award in Brussels alongside BEACON project’s Iain Donnison Welsh Government Finance Minister Jane Hutt said: “This is an excellent example of how EU projects are delivering in Wales through ground-breaking research and innovation which is helping to drive our economy and global competitiveness. This also demonstrates the importance of EU membership to Wales and the benefits of EU Funds to people across the region.”

The Regio Stars awards have been organised by the European Commission since 2008 with the objective of identifying good practices in regional development and highlight original and innovative projects which could be attractive and inspiring to other regions.

Professor April McMahon, Vice-Chancellor of Aberystwyth University said; “Winning this important European award is tribute to the hard work and commitment of the BEACON team led by Aberystwyth University. With our partners in Bangor and Swansea we are working with industry, and pooling scientific expertise and cutting edge technology to make a significant contribution to developing the green economy in Wales. This work provides a strong platform on which we are building our new Innovation and Diffusion Campus.”

Bangor University’s Vice-Chancellor Professor John G Hughes said; “This truly collaborative venture between the three institutions has helped to facilitate interaction with local companies and increased the investment back into Wales. It is encouraging to see that the model of working with companies to build capacity is being recognised. Let’s aim to build on this for the future.”

Professor Richard B. Davies, Vice-Chancellor of Swansea University said; “Beacon is a particularly successful partnership because we had the necessary world-class expertise within Welsh universities and European Regional Development Funding has enabled the disparate but complementary groups to work effectively together.  This has created an ambitious multidisciplinary team able to focus on more challenging problems and worthy recipients of a RegioStars award.”

Professor Iain Donnison, Director of BEACON said; “We are delighted to have won the RegioStars Award. This is international recognition of the importance of the innovative work being done by BEACON.

“BEACON is driven by the challenging targets for the adoption of green technologies and reductions in greenhouse gas emission that have been set by national governments and the European Union.”

“Low carbon technologies including biorefining and industrial biotechnology are seen as important growth sectors and will need sustainable supply chains that will generate economic activity and jobs, and it is these that provide the focus for the work being done at BEACON.”

BEACON is funded by the European Regional Development Fund (ERDF) through the Welsh Government, under the Convergence programme for West Wales and the Valleys.

Further information about BEACON is available online at http://beaconwales.org/en/

The full list of winners and further information about RegioStars Awards is available online at: http://ec.europa.eu/regional_policy/projects/regiostars/regiostars_en.cfm.