Climate change is impacting the spread of invasive animal species 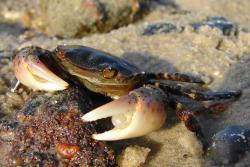 Introduced, invasive species on the coasts of the North Sea, of which strong impacts are known, but which has not yet occurred on domestic coasts. Perhaps possible displacement of local beach crab, Carcinus maenas.: (Photo: Alfred-Wegener-Institut / Karsten Reise)Research by a team of experts from Bangor University, and the German Alfred Wegener Institute, Helmholtz Centre for Polar and Marine Research (AWI) and University of Greifswald’s Zoological Institute and Museum has revealed how climate change may be assisting the spread of invasive species.

The results of their study which have just been released in the journal “Ecography” indicated considerable potential for the Asian shore crab to spread further north, along the coasts of Northern England and Norway.

According to Dr Luis Giménez of Bangor University’s School of Ocean Sciences:

“Our study confirms that, when it comes to predicting the climate-related spread of marine animals, we need to especially focus on the early stages of development, as they are critical for the settlement on new habitats and the establishment of new permanent populations.”

Crustaceans dominate the food webs of many costal habitats in our oceans. In addition, many crab species have spread far beyond their natural homes as ‘stowaways’ on board of vessels used in global shipping.

>Invasive species are often found to be able to cope with changes in their environment such as fluctuations in temperature and salinity, and so are more adapted to the effects of climate change in the oceans.

Using the Asian shore crab as a model species, the researchers focused on the early developmental stages and examined its microscopically small 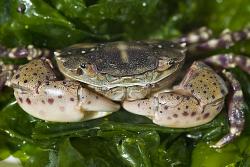 The team also developed models for predicting the speed at which the Asian shore crab could spread northwards, taking climate warming into account. This modelling indicated considerable potential for the Asian shore crab to spread farther north, along the coasts of Northern England and Norway.

The Asian shore crab Hemigrapsus sanguineus is a good example of one of these invasive species: in just a few decades this native of the Pacific, has spread to many corners of the globe. By the 1980s, it had made its way to the Atlantic coast of North America, and by the 1990s, had gained a foothold in the coastal waters of Europe. In both North America and Northern Europe, this species is spreading farther and farther north, toward the rapidly warming polar waters. In the ecosystems they invade, these crabs can soon reach such large numbers that native species like the European shore crab Carcinus maenas are impacted or displaced. 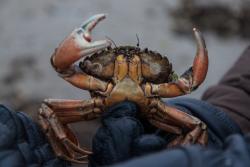 The European shore crab Carcinus maenas. : (Photo: Alfred-Wegener-Institut / Tina Wagner)he Asian shore crab Hemigrapsus sanguineus Furthermore, they exert considerable predation pressure in their new homes, often decimating marine invertebrates like mussels or young shore crabs, and taking these food sources away from other species in the process. This can produce lasting changes to the invaded ecosystems.

Prof Steffen Harzsch from the University of Greifswald’s Zoological Institute and Museum commented: “The Research Training Group RESPONSE offers us an outstanding platform for scientifically investigating various aspects of climate change, through interdisciplinary collaborations that reach far beyond Greifswald.”