This article by Anne-Marie Smith, and Nia Young, both of the School of Education was originally published on The Conversation. Read the original article.

It’s that time of year – the season when parents, schools and retailers sell one of the most magical lies to children: Santa Claus. But far from being a harmless way to fire children’s imagination at Christmas, the “Santa lie” undermines children’s understanding of the world, their savviness and their real imagination in favour of wrapping them up in cotton wool and consumerism. 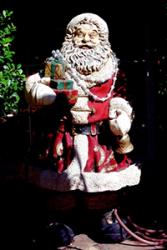 Clyde Robinson via FlickrResearch recently suggested that parent’s promoting their children’s belief in Santa can affect the trust in their relationship. An unsurprising response was that this spoiled the fun of Christmas and limited children’s imagination. And, after all, we lie to our children all the time through fairy tales and other stories of magic and mythology. But this argument only goes so far – no one tells children that Cinderella is real and that she sneaks into their houses and leaves shoes on the stairs. They’re stories – and we tell children that stories aren’t real to protect them from being frightened by imaginary threats such as trolls, giants and witches.

When we asked our undergraduate students about their experience of the Santa lie, the general consensus was that it was essential to “keeping the magic alive” in childhood – and the memory of the magic was so strong in some that they recounted tales of their “trauma” when they found out that their parents had been lying for all those magical years. And for many, people’s decision not to perpetuate the lie with their own children is often viewed as a failure to protect their children’s innocence. So it’s ironic that the Santa lie, a metaphor for childhood innocence, is so wrapped up in a force that is all about destroying childhood innocence – consumerism.

The Santa lie perpetuates one of the enduring dichotomies surrounding childhood: the dependent (good) child and the independent (evil) child.

On the one hand we want to uphold the magic (adult nostalgia for lost childhoods) so that we can keep children in that safe, innocent world where everything is sparkly and happy – and a man on a sleigh brings presents on Christmas eve to good children.

But on the other hand, with Christmas now a billion-dollar industry where Santa is actually the white bearded, red-hatted jovial face of toy manufacturers and the like, a representative of corporations and corporate greed. Santa is a long way from his original outing as St Nicholas who – the story goes – gave away his money to help people in need. 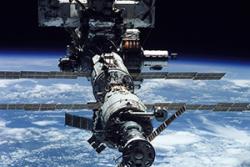 the International Space Station: Global Panorama see Flickr source for rightsThe Santa lie is wrapped up in a discussion about loss of childhood – something that sits alongside statistics about less outdoor play, fear of technology, stranger danger and the perils of social media. In a fierce bid to keep children in (an adult’s perception of) a nostalgic bubble of childhood, parents wrap the Santa lie around them like a soft, warm protective blanket. As long as Santa exists, then all is well in the world of childhood.

But who do we think children are? Adults consider childhood innocence to be the cause of a child’s ability to marvel at the simplest facts of life, a knack disillusioned adults have lost. If this is true, children don’t stand in need of a fictional, magical character to maintain their innocence when the reality of a blanket of snow can be wonderful. Rather, it is adults who are in need of magic. However, as adulthood is constructed as the polar opposite (and end) of childhood, belief in Santa is not acceptable. Instead, adults indulge in this wonder vicariously by creating “magic” for children.

Children are people who don’t need magic invented for them. Consider the International Space Station (ISS): children are able to see that it is beautiful as it flashes past without having to believe that it is Santa out on his sleigh as is now becoming the norm to suggest. What if we told them the wonderful truth: that people are living in space, right now? Isn’t this truth both magical and supportive of children’s trust in adults?

In addition to undermining children’s own imagination, the Santa lie perpetuates something that is endemic in perceptions and portrayals of childhood: that these are just little people who need wrapping up in cotton wool and at all costs protecting from the real world. However, far from protecting children the Santa lie facilitates insidious and harmful activities for children: consumerism, trust in strangers, and the belief that being “naughty” and “nice” are mutually exclusive.

What if, instead of inventing magic for children who don’t need it, adults spent Christmas letting children show them the magic they see in frozen water, the baking process and YouTube shows? Instead of trying to perpetuate our nostalgic ideas of childhood, we could consider children’s own view of the world: so rather than lying, we get to see magic as they see it, and not what is fabricated for them by adults.