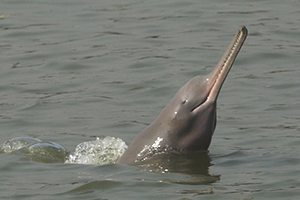 Research author, Nadia Richman, who is a scientist at the Zoological Society of London and also a PhD student at Bangor University’s School of Environment, Natural Resources & Geography said:

“Freshwater cetaceans occupy some of the most densely populated and polluted river systems in the world. We need to make decisions about the best way to manage these species before another becomes extinct. However, these decisions need to be based on evidence which means we need methods that can detect changes in population size in the quickest time possible and for the least cost.” 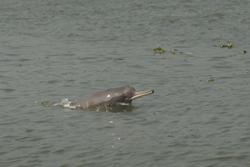 A Ganges River Dolphin: image credit: Mansur/WCS BangladeshPreviously it was believed that visual survey methods - reliant on conservationists spotting and recording surfacing dolphins - were the most cost-effective way of surveying the species. The study revealed that detecting the sound that dolphins emit using a method called a combined visual-acoustic survey, can improve the ability to detect population trends and relatively quickly become the cheapest method for surveying.

Nadia added: "I chose to come and study in the School of Environment, Natural Resources and Geography at Bangor University given its reputation as an interdisciplinary research centre. Over the last three years I have met a diverse range of researchers with a broad range of expertise which has meant that I am never short of advice when needed."

These findings have been published (7th of May) in the journal PLOS ONE.