This article by Julia P G Jones, Professor of Conservation Science at the School of Natural Sciences, is republished from The Conversation under a Creative Commons license. Read the original article.

"People are too afraid to return to the village so they are sleeping in the forest or have left altogether. They have lost their stored grain and all their belongings. I don’t know how they will get by." 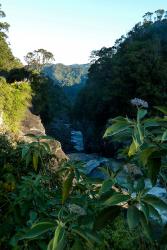 Ranomafana National Park: CC BY-SA 3.0These are the words of Riana*, a young woman from Bevoahazo, a tiny village in the eastern rainforests of Madagascar. Bevoahazo sits on the edge of Ranomafana National Park in a UNESCO world heritage site teeming with endangered and endemic species. Security in the area has been deteriorating over the last few years but things have escalated recently.

On November 24, 50 men raided the village stealing stores of rice – vital food reserves for local people who are mostly subsistence farmers – and injuring anyone who tried to defend their property. A few days later the local police chief, Heritiana Emilson Rambeloson, who had come to the area with a small team to investigate, was shot dead.

I spent two years living in Bevoahazo in the early 2000s while researching the sustainability of crayfish harvesting. I have spoken to friends from the village who are are currently staying in the nearby town of Ranomafana for safety, and researchers in the area to get a better understanding of what is happening.

Patricia Wright, a professor of anthropology, has spent more than 30 years working in Ranomafana. She directs the Centre Valbio, an internationally renowned conservation research centre situated on the edge of the forest. She said:

"The security situation is at crisis point. This is leading to real human suffering in one of the most important places for biodiversity on the planet. The [murdered policeman] was smart, dedicated to his job and was interested in wildlife and the importance of the forest. A genuine friend. We will miss him."

The recent death comes just months after a member of Valbio staff was killed by bandits. Jean François Xavier Razafindraibe was killed when armed men raided his village close to the park entrance in June 2018. 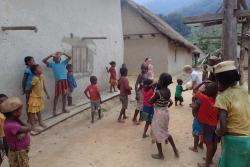 The author’s children playing with friends in Bevoahazo in happier times.: Image: Julia JonesRanomafana National Park was established by the Malagasy government to protect its globally important biodiversity. As part of the Forests of Atsinanana it is home to a number of critically endangered endemic lemurs such as the golden bamboo lemur and the black-and-white ruffed lemur.

Ranomafana is a popular tourist spot in Madagascar with stunning scenery, rare wildlife and the friendly, sleepy town nearby. So far the insecurity hasn’t influenced tourism. As Wright says:
"The bandits steer clear of tourists, but the villagers are living a life of fear."

Miners panning for gold illegally in the forest interior are a source of the insecurity. This has been an ongoing issue for many years but has become much more difficult for the park authorities to control. The miners pollute rivers, clear the rare swamp forest and hunt endangered wildlife for meat.

The situation is complicated. Armed cattle thieves known as dahalo are causing havoc in many areas of Madagascar. A recent estimate suggests they have caused 4,000 deaths in the last five years alone.

In 2017, the mayor of the neighbouring town of Ambalakindresy, Elysé Arsène Ratsimbazafy, was shot dead in what is widely believed to have been a hit. He had run for election on a platform of ridding the town of the bandits and had cooperated with efforts to get the miners expelled from the national park interior. 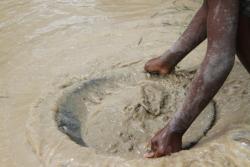 Illegal gold miners in the forest are thought to be the source of the raids. : Image:Ricardo RochaMar Cabeza, a professor of biology at the University of Helsinki, returned from the area a few days ago. She said:
"The gold mining has escalated in recent years and differs greatly from previous subsistence-related threats. The widespread fear has negatively affected both research and conservation management."

One of Cabeza’s PhD students, Marketta Vuola, was meant to conduct research in the attacked villages recently, but was warned of the danger and moved to another village. Vuola told me:
"News spread fast, with all villages in the region being afraid. We spent last night hiding, with our day packs ready to escape to the forest."

There has been a robust response to the recent series of attacks. The district quickly sent reinforcements of 80 police. This will hopefully reassure the local population, allowing people to return to their village, and will reduce the immediate threat.

This reassurance is essential as my old friend Koto* told me over the phone:
"People need to be able to get back home to tend their crops; if they can’t do this they will suffer even more."

However the rise in insecurity reflects a wider problem of respect for the rule of law in Madagascar. Jonah Ratsimbazafy, a professor of paleontology at the University of Antananarivo in Madagascar, said:
"If you focus on what is happening, then you will lose your hope for Madagascar. We must focus on the solutions. Good governance is crucial in order to develop the economy of Madagascar and for saving the irreplaceable biodiversity."

Madagascar will elect a new president on December 19. People in Bevoahazo, and throughout Madagascar, are hoping that the new government can bring the change so desperately needed.

*These names have been changed to protect identity.