During the round table meeting the Ms Berger was updated on the training and research that CMRP had conducted since its formation over 10 years ago, and spoke with the co-founder of the All Party Parliamentary Group on Mindfulness, Chris Ruane.

CMRP, part of Bangors highly ranked School of Psychology, was the first centre in Europe dedicated to training in mindfulness-based approaches and was the first to 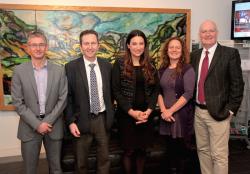 Prof, John Parkinson, Prof. Oliver Turnbull, Luciana Berger MP, Prof. Nicky Callow, Chris Ruane former MP for Vale of Clwydestablish a Master’s programme in mindfulness. CMRP has trained more than 1,200 professionals to teach mindfulness. Eluned Gold, UKCP registered psychotherapist and Head of Continuing Personal and Professional Development at CMRP, advised that mindfulness has a role to play in promoting health and wellbeing within individuals and throughout society. She said that teaching mindfulness to parents, especially during the perinatal period, teaches parents skills that will support family life for its life span. Early childhood experiences can affect a child’s mental and physical health into adulthood.

‘Mindfulness is becoming increasingly recognised as an important technique for managing and improving mental health. The University of Bangor is at the forefront of this work, and it was fantastic to learn more about what they do. In my role as Shadow Cabinet Minister for Mental Health I will continue to raise the profile of mental health and mindfulness in Parliament.’

‘In spite of excellent evidence and being approved by NICE as an intervention for recurrent depression; the availability of Mindfulness-based Cognitive Therapy (MBCT) throughout the NHS England is still very patchy. 71% of GPs in England would like to refer patients to mindfulness, but only 1 in 5 are aware of having access to mindfulness in their region’.

Chris Ruane, former MP for Vale of Clwyd and Honorary President of an All Party Parliamentary Group (APPG) on mindfulness said:

‘The APPG on Mindfulness supports further research and implementation. CMRP and Bangor University are recognised and respected internationally as a centre for excellence in teaching and upholding quality and integrity in the field’.