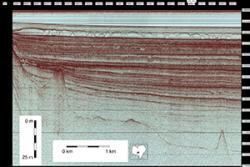 A seismic cross-section of the lake sediment. The layers of different deposits create echoes so that the image is almost like a geological cross-section. They hold the clues that allowed the reseachers to ascertain the past environments.The origin and population expansion of anatomically modern humans (AMH) continues to be a much-debated area of research.

The previously established consensus is that humans originated on the African continent, in the area of the East African Rift Valley, and subsequently migrated “Out of Africa” around 70,000 years ago.  But there are a host of authors that suggest differently; with some of the more recent genetic evidence as well as somewhat limited archaeological evidence suggesting a much earlier date for the migration - around 120,000 to 130,000 years ago.

Against this back-drop, there is surprisingly little direct evidence of what the climate was like in East Africa over this time, yet it is acknowledged that this influences patterns of human migration.

Newly published research in Scientific Reports aims to plug this hole in our knowledge.

Led by Professor Henry Lamb from Aberystwyth University, researchers from Aberystwyth, Bangor, St Andrews and the NERC Radiocarbon Facility present a 150,000 year-long climatic record from Ethiopia.  It is thought to be the longest such climate record from NE Africa.

The research group conducted seismic surveys on Lake Tana, in the Ethiopian Highlands, and subsequently collected a 93 metre-long sediment core from the lake bed.  Advanced luminescence techniques provided a breakthrough whereby the core material could be well-dated. 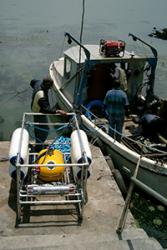 Making preparations for a seismic survey, in the harbour of Gorgora, a village on the northern coast of Lake Tana, source of the Blue Nile. Moreover, it was found that the age of the sediment in the core went back as far as the dates of contention in the AMH migration debate.

Geochemical data from the sediment provided information about the balance between evaporation and precipitation over time.  Combining this with the stratigraphy provided by the seismic data, the team were not only able to differentiate between wetter and drier times, but also between periods of climate stability and instability.

The record shows, for the first time, that a long period of relatively stable, moist, resource-rich conditions existed in this part of Africa from between 130,000 and 90,000 years ago.  This would have been conducive to the increase and spread of human populations from Africa at the earlier time suggested by recent genetic evidence on the matter.

Dr Dei Huws, a geophysicist at Bangor’s School of Ocean Sciences explained, “We were fortunate in that the seismic records were of really high quality.  They showed that the lake had been subjected to alternate times of quiet, continuous sedimentation, interrupted by more unstable periods.  At some time intervals, the lake looks to have dried-up completely, before channel systems cut into the desiccated surface.  After that, normal sedimentation resumes until the next event happens” 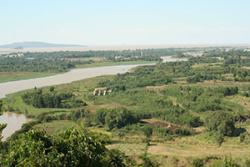 A view of the Blue Nile, with Lake Tana seen in the background : Photo courtesy of Prof H LambProfessor Henry Lamb said, “The emerging consensus from recent work is that there were probably several episodes of dispersal from Africa into Asia, from as early as 130,000 years ago; and this new field data shows clearly that the climate in East Africa was conducive at this time”.

The NERC-supported work reported here is part of a longer term set of projects based in East Africa, with the same research team currently working with colleagues from Germany and the US to research climate change across more sites across East Africa and over longer time periods.