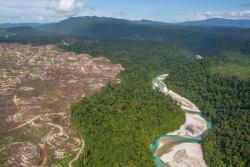 Documentaries portray pristine habits, but that’s not always the case.Over six decades, Sir David Attenborough’s name has become synonymous with high-quality nature documentaries. But while for his latest project, the Netflix series Our Planet, he is once again explaining incredible shots of nature and wildlife – this series is a little different from his past films. Many of his previous smash hits have portrayed the natural world as untouched and perfect, Our Planet is billed as putting the threats facing natural ecosystems front and centre to the narrative. In the opening scenes we are told: “For the first time in human history the stability of nature can no longer be taken for granted.”

This is a very significant departure – and one which is arguably long overdue. Those of us who study the pressures on wild nature have been frustrated that nature documentaries give the impression that everything is OK. Some argue that they may do more harm than good by giving viewers a sense of complacency.

Conservation scientists were expecting that the new series wouldn’t shy away from the awful truth: the wonders shown in these mesmerising nature programmes are tragically reduced – and many are at risk of being lost forever.

I had the privilege of seeing the One Planet team at work back in 2015 (these films take years to make). I spent three weeks at the camp in western Madagascar where they were working on their forest film. While the camera crew were working day and night filming fossa (lemur-hunting carnivores), and trying to get the perfect footage of leaf bugs producing honeydew (the series is worth watching for this sequence alone), the team was also digging deep into the complex issues of what is happening to this wondrous biodiversity. Their researcher spent many hours with Malagasy conservation scientist Rio Heriniaina talking to local community leaders about the challenges they face and the reasons for the very rapid rate of forest loss in the region. 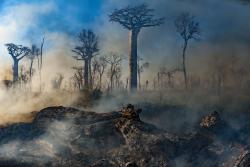 Our Planet’s team filmed the burning of Madagascar’s dry forests, but this didn’t make the final cut. : Image: Jeff Wilson/Silverback/NetflixHowever, none of that fascinating footage made the final cut. Following a scene showing fossa mating, we are told that their forests have since been burnt. This was already happening in 2015. As Heriniaina told me:
"Madagascar’s dry forests are vanishing before our eyes. Every burning season large areas of forest go up in flames to clear space for peanuts and corn. There is no simply answer to as why, and no simple solutions. Poverty plays a role but so does corruption and the influence of powerful people who profit from the destruction."

This is my main critique of Our Planet. Despite being billed as an unflinching look at the threats facing the intricate and endlessly fascinating ecosystems being depicted, it actually tends to shy away from showing these threats or, even more importantly, addressing the question of what can be done to resolve them. Like previous documentaries, shots have been carefully positioned to cut out evidence of human influence.

In my three decades of watching wildlife documentaries, I remember only one moment which broke from this tradition. In Simon Reeves’ 2012 series about the Indian Ocean, he showed people living in and around the habitats he was filming. He humanised them. He was also honest about how limited the picturesque natural habitats he was filming were. In a memorable sequence showing a sifaka leaping between trees, he asked the camera man to turn around, revealing the miles of sisal plantation which surround the tiny remnant of forest where endless crews go to film these charismatic lemurs. When Planet Earth II came out in 2016 I was disappointed to see a return to more of the same – that same remnant forest in southern Madagascar appeared, but without the context.

As with previous documentaries, you could come away from Our Planet thinking the places being portrayed are completely separate from people. Human presence in and around many of these habitats has been erased. However to be successful, conservation can’t ignore people.

Maybe it is churlish to complain that Our Planet, like other such films, avoids showing the uncomfortable truth about just how threatened so much of nature really is. Perhaps the pure and unsullied vision is what makes them so popular. So many of us working in conservation were drawn in through watching Sir David Attenborough’s other films as children. By introducing viewers to fascinating facts about ecology (who knew that winds blowing across deserts feed life in the ocean?) and the mind-boggling behaviours of birds (such as the manakins shown doing a shuffle dance), Our Planet will engage a whole new generation.

Researchers have shown time and time again that knowledge isn’t enough to change people’s behaviour. However feeling connected with nature does matter. One thing the series will certainly do is make people fall in love with the planet. That is certainly a good thing.