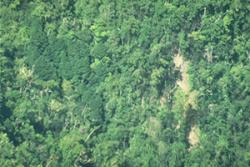 Pittosporum undulatum or mock orange are the dark green trees seen on the left in thei forest canopy in Jamaica. : All images- credit John HealeyAn invasive Australian tree is now posing a serious threat to a global diversity ‘hotspot’ according to new collaborative research between Landcare Research in New Zealand, the Universities of Cambridge (UK) Denver (US) and Bangor University (UK).

This species, Pittosporum undulatum, known locally as mock orange, was introduced to a botanic garden in the Blue Mountains of Jamaica in the late 19th century. As its local name suggests, this fast-growing, glossy-leaved tree has bright orange fruit which open to reveal small, sticky, sugary-coated seeds. These are widely dispersed by native Jamaican bird species and it has been invading new habitats at a high rate. At first, the species took over land abandoned from the cultivation of coffee and tree crops, but more recently it has expanded into the natural forests of the Blue and John Crow Mountains National Park. This invasion was accelerated by the damage caused to the forests by Hurricane Gilbert 29 years ago, and it is likely to be further advanced by future major hurricanes.

The National Park is a globally important hotspot of biodiversity with many rare and endangered species, including orchids, butterflies and birds, some of which are found nowhere else in the world except for the mountain forests of Jamaica.

Studying these forests over a period of 40 years, the researchers found a continuing increase in the abundance of the invasive Pittosporum, so it now accounts for more than 10% of all tree stems. 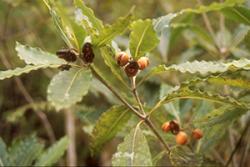 Fruit of the mock orange tree, containing the seeds that are widely dispersed by native bird species“Over the past 24 years the severity of this invasion was associated with a decline in the diversity of native tree species, including those species that are found only in Jamaica, which are the highest conservation priority. The ‘mock orange’ outpaces the growth of most native trees, and its dense foliage casts a dark shade over their seedlings severely restricting their regeneration.”

These results are reported in a paper published in the international journal Biological Conservation.

This study provides good evidence for predicting that the threat posed to the globally important biodiversity of the Jamaican Blue Mountains will only increase, especially after the next hurricane seriously disrupts the canopy of the natural forest.

One group of threatened plant species are the “bromeliads”, which grow on the stems of native trees but cannot grow on the smooth bark of the mock orange. They have a water-filled hollow in the centre of their rosette of leaves, a tank which is home to insects that provide an important food source for the endangered Jamaican blackbird, the most severely threatened bird species in the Blue Mountains.

If implemented now, active conservation measures could help to avert this global biodiversity catastrophe, both in Jamaica and in the many other global biodiversity hotspots that are threatened by invasive species. However, they are held back by lack of available resources. 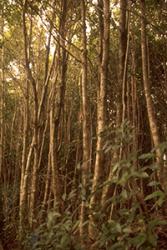 Bromeliads grow on the stems of native trees but cannot grow on the smooth bark of the mock orange.Lead researcher Peter Bellingham issued the following plea:

“Given the strength of our evidence of the serious consequences of this invasion for biodiversity, we urge the relevant institutions in Jamaica, and international funding bodies, to prioritise a programme of control of this species. We are sure that active intervention at this stage would be very cost effective, reducing the much greater costs of trying to restore the native forests if the invasion is allowed to spread further.”