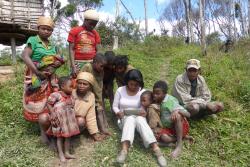 Co-author Rina Mandimbiniaina entering data from an interview, looked on by a household: Credit: O.S. RakotonarivoGlobal conservation targets should not be met at the cost of the world’s poor. The first study to evaluate a policy aiming to compensate local people for the costs of conservation has revealed that, despite good intentions, the poor have lost out.

Tropical forests are important to all of us on the planet. As well as being home for rare and fascinating biodiversity (like the lemurs of Madagascar), tropical forests lock up enormous amounts of carbon helping to stabilise our climate. However tropical forests are also home to many hundreds of thousands of people whose lives can be affected by international conservation policies.

Multilateral donors such as the World Bank have made clear commitments that those negatively impacted by their projects should be compensated. This includes those affected by conservation projects such as those intended to slow climate change by preventing tropical deforestation (a scheme known as REDD+ or Reducing Emissions from Deforestation and Forest Degradation). Researchers have, for the first time, studied one such compensation scheme in depth and revealed it to be inadequate.

The researchers from Bangor University in the UK and the University of Antananarivo in Madagascar looked at a new protected area and REDD+ pilot project in the eastern rainforests of Madagascar called the Coridor Ankeniheny Zahamena (or CAZ). This conservation project is conserving very high profile biodiversity (including the Indri-the largest lemur in the world), but a big part of the rationale for protecting the area is climate mitigation; locking up carbon to combat climate change. 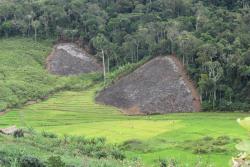 Most people in the CAZ are small scale farmers whose livelihood depends on shifting agriculture. Conservation restrictions have a big impact as other alternatives are few. : Credit: M PoudyalIn their paper, peer-reviewed and published in PeerJ – the Journal of Life & Environmental Sciences, the researchers show that the new conservation restrictions bring very significant costs to local people (representing up to 85% of local annual incomes). Compensation, in the form of help with improved agriculture, was offered to a subset of people but none were fully compensated.

The researchers estimate that 27,000 people have been negatively impacted by the conservation project. These are people who are extremely poor by any measure.

The cost of conservation are real as Dr Sarobidy Rakotonarivo, a Malagasy researcher involved in the research, explains: “Those who clear land for agriculture are often those that are most food insecure. Beyond the economic costs of not being able to grow food to feed their family, local people suffer from conservation enforcement. I have heard first hand reports of people being arrested and held in deplorable conditions for cultivating on forest fallow which they consider ancestral land. In a country where jail conditions are inhumane, this shows how desperate people are.”

The compensation offered was in the form of agricultural development support. While many people appreciated this support, too few people received it, those who did receive it tended not to be the most in need, and the value of the support was very low when compared to the costs of conservation.

Professor Julia Jones, one of the researchers, suggests that proper, effective compensation should be affordable. “While our results show that policies 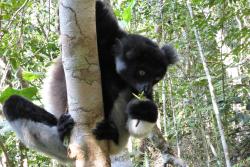 The biodiversity of the rainforests of eastern Madagascar is fabulous, including this indri (the largest lemur in Madagascar).: Credit: JPG Joneswhich promise to compensate communities for the cost of conservation are not being met, this is not a case of corruption. Money has not gone missing. The truth is that the world is not currently paying enough to ensure that poor local people are properly compensated. We show that if rich countries were willing to pay the full social cost of carbon, proper compensation could be affordable.”

The conclusions were based on in-depth interviews with a sample of 603 people from several communities over a period of more than 2 years. Fieldwork was very intensive and households were visited up to three times over the course of the study.

The researchers point out that excluding local people from protected areas can create other problems. Apart from being environmentally unjust, uncompensated losses can cause antagonism between conservationists and local people whereas cooperation is vital to successful management of protected areas.

Professor Jones adds: “These are difficult results to present. I strongly believe that conservation of Madagascar’s rainforests is hugely important (for Madagascar and for the world) and know many dedicated and extremely hard working people working in conservation in Madagascar. This is no criticism of them. However if the international community underpay for the true cost of conservation, then the rich world is essentially freeloading on extremely poor forest residents; gaining benefits while they bear the costs.”