What language tells us about changing attitudes to extremism

This article by Josie Ryan, PhD Researcher,  at the School of Linguistics & English Language, Bangor Universitywas originally published on The Conversation. Read the original article.

The words “extreme”,“extremist” and “extremism” carry so many connotations these days – far more than a basic dictionary definition could ever cover. Most would agree that Islamic State, the London Bridge and Manchester Arena attackers, as well as certain “hate preachers” are extremists. But what about Darren Osbourne who attacked the Finsbury Park Mosque? Or Thomas Mair who murdered Labour MP Jo Cox? Or even certain media outlets and public figures who thrive on stirring up hatred between people? Their acts are hateful and ideologically-driven, but calls for them to be described in the same terms as Islamic extremists are more open to debate.

The word “extreme” comes from the Latin (as so many words do) “extremus”, meaning, literally, far from the centre. But the words “extremist” and “extremism” are relatively new to the English language.

Much language is metaphorical, especially when we talk about abstract things, such as ideas. So, when we use “extreme” metaphorically, we mean ideas and behaviour that are not moderate and do not conform to the mainstream. These are meanings we can find in a dictionary, but this is not necessarily how or when extreme, extremist, and extremism are used in everyday life.

One way of finding out how words are used is to look at massive databases of language, called corpora. To find out more about how these words developed in Britain, I turned to the Hansard corpus, a collection of parliament speeches, from 1803 to 2005. Political language is quite specific, but analysing it is a good way to see how the issues of the day are being described. In addition, having a record which covers two centuries shows us how words and their meanings have changed over time.

Apart from the adverb “extremely” – used in the same way as “really” and “very” – my search showed that the word extreme was used most frequently in its adjective form during this 200-year period. However, usage of extreme as an adjective has been declining since the mid-1800s, as has the noun form. At the same time, two new nouns, “extremist” and “extremism” begin to appear in the corpus in the late 1800s, and usage gradually increases as time goes on. No longer are certain views and opinions described as extreme, instead extremist and extremism are used as a shorthand for complex ideas, characteristics, processes and even people. 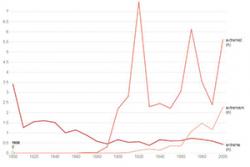 Frequency per million words of the nouns extreme ( bottom), extremist (top) and extremism (middle) between 1803-2005.In the graph (right), we can see three peaks in the frequency of the noun extremist(s). It is interesting to see which groups have been labelled as extremist in the past as this can provide clues about who is considered an extremist these days, and also who is not.

In the 1920s, extremist and extremism were often used in connection with the Irish and Indian fights for independence from the British Empire. 50 years on, they are linked with another particularly violent period in Irish history, while Rhodesia was also fighting for independence from Britain in the 1970s. The final increase in usage of the terms extremist and extremism comes, perhaps unsurprisingly, at the start of the 21st century.

However, the words have not been solely linked to violence: they were very often used to describe miners in the 1920s and animal rights activists in the 2000s. Both of these groups have had a lot of support from the British population if not from politicians speaking in parliament.

I also looked at the words that appear around the extreme words, or “collocates”. What I found is that the collocates of the search terms become increasingly negative over the period covered in the Hansard corpus. They also became less connected to situations, and more closely connected to political or religious ideas and violence. For example, in the late 20th century and early 2000s, “extremism” became more associated with Islam, and at the same time, it was collocated with words such as “threat”, “hatred”, “attack”, “terror”, “evil”, “destroy”, “fight”, and “xenophobic”.

After 2005, the extremist terms became much more frequently associated with the Islamic faith – to the point where the word “extremist” is now almost exclusively used to refer to a Muslim who has committed a terrorist act, and some have suggested there is reluctance to use it otherwise.

Looking at the collocates of extremist and extremism in a corpus of UK web news, which runs from 2010-2017, five of the top 10 collocates are related to Islam. “Right wing” and “far-right” also appear in the top 10. However, the top three collocates – “Islamic”, “Islamist” and “Muslim” – appear 50% more frequently than the other seven collocates in the list added together.

The most interesting thing to come out of this investigation is what has gone unsaid. Extremist and extremism are not being used as they were in the past to describe violent, hateful, and ideologically-driven acts, with no reference to ethnicity or faith. Today, the terms have become almost solely reserved for use in reference to Muslims who perpetrate terrorist attacks.

The words we use can affect and reveal how we perceive the world around us. Word meanings change over time, but reluctance to use the same word for the same behaviour betrays a bias towards crimes that are, perhaps, uncomfortably mainstream.