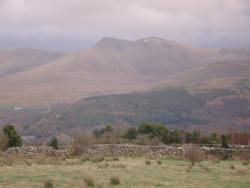 The Lincoln crashed below the ridge on the right of the photograph. Above the houses on the left is the approx location of the Waterworks.n the early hours of 15 March 1950 an Avro Lincoln bomber from RAF Scampton, Lincolnshire crashed above Bethesda. None of the crew, aged between 22 and 32, survived.

In this, the 80th year since the Battle of Britain, Dr Hazel Pierce, Associate Member of the Stephen Colclough Centre for the History and Culture of the Book at Bangor University, has looked into this accident to remember the six men who lost their lives and to recognise the efforts of local people who helped in the rescue attempt that night.

‘All of the crew were young men, some with young families who had already served their country with honour and survived terrible dangers during the war,’ explains Hazel. ‘It is hard to accept that they lost their lives during peace time on a routine training flight.’

After being diverted to RAF Valley due to bad weather, the Lincoln approached with a defective radio which necessitated communicating with it on two frequencies. It was seen and heard overhead but ten minutes later Mr Owen Brown-Williams, Water Bailiff at Bangor Corporation Reservoir, Gerlan and his wife Agnes awoke to the roar of a plane’s engines.  Looking out the window they saw the navigation lights of a large plane.  The huge bomber with a wingspan of 120ft was on a steady course and showing no sign of being in difficulties but, according to Owen, ‘it looked to be too low in such a mountainous area.’ 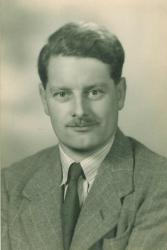 Pilot Squadron Leader Shore. He was also awarded the AFC (Air Flying Cross) : Image courtesy of Mark Shore.Owen’s judgement was sadly correct and the destruction of the great plane and its six crew was only minutes away. ‘We heard an explosion within a very short time and a sheet of fire leapt into the night sky at the far end of the Llafar Valley’. Also witness to the terrible explosion were upland farmers who described it as ‘a ball of fire in the valley with burning fragments scattering in all directions.’

Agnes Brown-Williams immediately telephoned the police station at Bethesda and placed a light in her bedroom window as a guide for any survivors. The RAF Station at Valley, who was still trying to make contact with the plane, were shocked to receive the unbelievable news and the RAF Mountain Rescue Team was deployed.

Members of the Fire Brigade arrived at the waterworks and split into two groups; one guided by Mr Owen Brown-Williams and the other by Mr John Ogwen Thomas of Tyddyn Du Farm, Gerlan.  In the days before volunteer Mountain Rescue teams, it was men like these who came out to help as they possessed detailed local knowledge, and would be able to identify the safest and quickest route to the crash site.

The rescue parties set off up the Llafur Valley over boggy, boulder strewn ground in pitch dark, buffeted by strong winds and showers of rain.  Whilst they slogged their way over four miles of moorland the aircraft continued to burn, but the parties could see flares being set off which gave them hope that there might be survivors.

On arrival at the crash site the hope generated by the flares was completely dispelled, no-one could have survived such an impact which was a mere few hundred feet below the ridge between Carnedd Llewelyn and Carnedd Dafydd.  Four bodies were found in the smouldering wreckage almost immediately whilst a search had to be made for the remaining two. 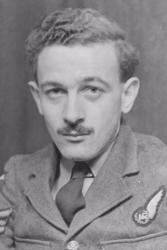 Godfrey, known as Leo to his brother John, was official photographer for his unit at one stage during his service. : Image courtesy of Mick CundyMr Chris Lloyd of the Ogwen Valley Mountain Rescue team explains: ‘an aspect which was not considered in the 1950s is the traumatic effect that an incident such as this might have on the rescuers.’ Mr Lloyd continues: ‘today there is awareness and counselling expertise to assist rescuers with recovery from such an experience.’

At the inquest in Bethesda a verdict of accidental death was recorded and the coroner remarked that ‘how it happened that the pilot found himself in the hills was a puzzle and would obviously remain a puzzle.’

He also thanked all those who had gone out to help the aircraft’s occupants.  His thanks were echoed by Squadron Leader Hewitson from Valley who stated that he had dealt with aircraft crashes in the area during the war and ‘how much was appreciated the assistance always given and kindnesses shown by the people of Bethesda district to RAF personnel engaged in crash rescues.’

The huge bomber had crashed on the fringe of an area known as a graveyard for aircraft due to the number which had crashed there during the war. 70 years ago on 15 March 1950 it sadly claimed six more lives.

A longer Blog version of thi sstory is available here.