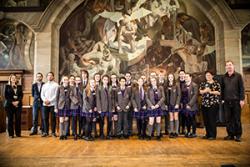 Language Mentoring Scheme participants from Rhyl High School at a recent event.A project to raise the profile of modern foreign languages has received extended funding from Welsh Government to reach pupils in rural parts of Wales.

The mentoring project is funded by Welsh Government and is part of its Global Futures plan which aims to improve and promote the take up of modern foreign languages in schools in Wales.

Over the last two years the mentoring scheme has had a significant impact on partner schools who have reported an increase in pupils choosing languages at GCSE as well as improved motivation to continue learning languages and to consider university.

Capitalising on the project’s success, Welsh Government is now extending the project to include a new digital platform to extend its reach to schools and pupils who have not been able to engage with the project due to geographical location. This is a significant milestone for the scheme, allowing pupils in remote or rural areas to connect digitally with student mentors. The Welsh Government is investing a further £140,000 for the third year of the project. 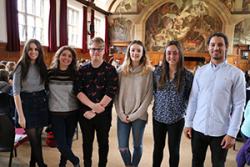 Some of the Bangor University Modern Languages students who participated as mentors in the Scheme.Heads of Modern Language Schools from the four partner universities recently met with Welsh Cabinet Secretary for Education, Kirsty Williams AM, to discuss new developments and how learning modern foreign languages could be further integrated into the school curriculum.

Dr Jonathan Ervine, head of the School of Modern Languages and Cultures at Bangor University said: “Like my colleagues from other Welsh universities who are involved in this project, I was hugely encouraged by speaking to Kirsty Williams about the ways in which Welsh Government plan to integrate languages into the new curriculum across Wales. We are looking forward to the launch of a digital platform that will mean we can work with an increased range of schools here in North Wales and ensure that even more pupils benefit from this fantastic project.”

Professor Claire Gorrara, academic lead for the mentoring project and Professor of French in the School of Modern Languages at Cardiff University said: “Introducing children to the building blocks of language learning at an early age is central to developing better awareness of other cultures and societies and as Wales and the UK approaches negotiations over exiting the EU this carries even greater importance for Wales’ future.”